Keshav Maharaj made his international Test debut against Australia in the ongoing test at Perth and has inscribed his name in the history by becoming the first spinner to have scalped a wicket. Maharaj had three wickets to his name in the first innings, which makes him the only spinner to have picked a wicket while making his international debut at Perth. It’s an interesting record to hold as as many as six spinners have debuted at this venue barring him but without much of a success. Though Vernon Philander had four scalps to his name and walked away with glory but Maharaj made a name for himself with his artful spin bowling. LIVE CRICKET SCORECARD: Australia vs South Africa, 1st Test at Perth

South Africa have made a remarkable comeback in the Test series after their batting order collapsed and were bundled out for 242 in the first innings. Steyn drew the first blood in the form of David Warner, who fell short of three runs from his century. South Africa bowlers did a commendable job in dismantling Australia for 244 in the absence of Steyn as Vernon Philander took charge and finished with four wickets to his name. South Africa are now well placed at 104 for the loss of two wickets at stumps on Day 2 with JP Duminy and Dean Elgar at the crease. They have a lead of 102 to their name and will look to make the most of it on Day 3. They need some massive runs on the board considering the fact that Steyn s services will be missing in the second innings. 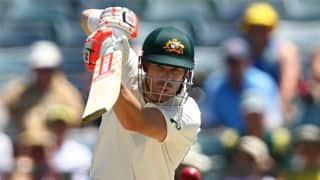