While Pollard is a T20I regular, he hasn t played an ODI in almost three years.

Cricket West Indies (CWI) President Ricky Skerritt made the announcement at a press conference, saying that the board was following the “best possible pratices for the best possible outcomes”.

Jason Holder is a very important force and he is still going to be our red ball captain. We believe Kieron Pollard is the right person at the right time now to lead the West Indies team in white ball cricket. One of the things we found in our One-Day team shortcomings is over 50 players were picked between the 2015 & 2019 World Cups. It made little sense and the results showed, Skerritt said at the press conference organised by Cricket West Indies (CWI) on Monday.

The decision comes after West Indies finished ninth among the 10 participating teams at the ICC Cricket World Cup 2019 in England earlier this year. Following their disastrous performance at the showpiece ODI event, West Indies also suffered defeats to India in a T20I series (0-3) and ODI series (0-2) which they hosted.

Holder though has managed to retain his position as Test captain despite a 0-2 defeat in a two-match series to India.

According to a report in the Trinidad and Tobago Guardian, the decision to appoint Pollard as the white-ball captain was taken by the Cricket West Indies Board of Directors on Saturday during their two-day quarterly meet in Port-of-Spain. The selection committee proposed his name and when vote was taken, six directors backed him while the remaining six abstained.

While Pollard is a T20I regular, he hasn t played an ODI in almost three years. His last ODI appearance was in October 2016 and despite calls for his inclusion, he was left out of the West Indies squad for the world cup in England. The 32-year-old batting allrounder was the top-run getter in the India T20I series, scoring 115 in three innings including a half-century.

“I’ve played franchise all over the world and I hope to use this experience to help the West Indies in my role as captain,” Pollard said after the announcement was made.

Pollard has played 101 ODIs, scored 2289 runs alongside three centuries and nine half-centuries. In 62 T20Is, he has 903 runs with three fifties and boasts of a career strike-rate of 125.41.

Currently, Pollard is captaining Trin ba go Knight Rid ers (TKR) in the ongoing Caribbean Premier League (CPL) in the absence of allrounder Dwayne Bravo, who was also present at the press conference on Monday “to show solidarity and support to the new captain”. 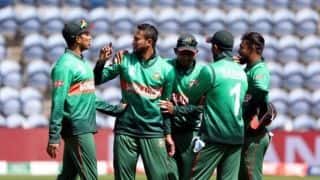