Kings XI Punjab were the best side of IPL 2014: Shahrukh Khan

Kings XI Punjab were the best side of IPL 2014: Shahrukh Khan

Kolkata Knight Riders won the Indian Premier League (IPL) 2014 in a thrilling finale against Kings XI Punjab at Bangalore and their owner Shahrukh Khan’s joy knew no bounds. He dedicated the victory to his youngest son Abram. But, during the victory celebrations, he was seen sporting the Kings XI Punjab jersey.

Shahrukh is close friends with Priety Zinta, the owner of the Punjab team. He said after the game on Sony Six, “The reason I am wearing this jersey (KXIP) is because Kings XI Punjab is the best team in the IPL.”

Punjab have dominated all teams in the IPL 2014 except for Kolkata and the Mumbai Indians. They had fancied their chances in the final when they scored 199, but Manish Pandey’s innings helped script a tremendous run-chase. 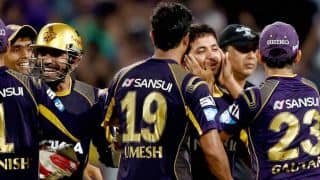