Kohli and India need to be smarter with reviews: Ajit Agarkar

Kohli and India need to be smarter with reviews: Ajit Agarkar

On Friday, India wasted both their reviews on Moeen Ali and Alastair Cook during the pair s 73-run partnership.

Former India fast bowler Ajit Agarkar has questioned Virat Kohli s habit of opting for unwise reviews, highlighting that the Indian captain needs to be smarter with his decision making when it comes to use of DRS (Decision Review System).

On Friday, India wasted both their reviews on Moeen Ali and Alastair Cook during the pair s 73-run partnership. Cook and Moeen were adjudged not out to LBW appeals, and even though the on-field s umpire decision looked convincing on both occasions, Kohli went upstairs without any success.

“You can see how involved he’s in the game. It’s as if sometimes he can’t help himself,” Agarkar said while speaking to ESPNcricinfo. “Everytime there is a big appeal, he wants to take a review. Unfortunately, the way the rules are now, if it’s not an umpire’s call, you lose it and it doesn’t get reversed until after 80 overs. So you’ve got to be a bit smarter.”

Agarkar pointed out that India were fortunate to not have any bad decision going against them, referring to the dismissal of Joe Root. Root was rapped on the pads by a menacing inswinger from Jasprit Bumrah, and it took the umpire a long time before raising his fingers. Root referred it, but the ball was crashing onto middle and leg stump. At that point in time, India had no reviews left.

“The bowler and the keeper need to help Kohli and he also needs to control himself a little bit. It could easily cost you the game,” Agarkar, who played 26 Tests and 191 ODIs for India, said.

“Remember how Joe Root got out. It was a good decision, but the umpire gave it too late. But if he hadn’t given it out, India would have struggled for a review. There were a couple of ordinary reviews yesterday.”

Agarkar mentioned the key is to refer with the players before going upstairs. “It’s got to be a combination of the bowler and the keeper, or if there’s a catcher around the bat,” he said. 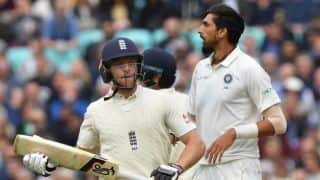