Bengaluru: In a first, the Karnataka State Cricket Association (KSCA) on Wednesday unveiled Rs 4.5 crore-valued next-generation subsurface aeration and vacuum-powered drainage system at Chinnaswamy Stadium. The Chinnaswamy Stadium, thus, became the first-ever cricket ground in the world to install such a technology. “This is KSCA’s latest project in our constant endeavor to introduce cutting-edge technologies to avoid delays or cancellation of matches due to wet outfield. This Rs 4.5 crore high-tech solution from SubAir, fastest resumption of the game is now possible,” KSCA Honorary vice president Sudhakar Rao said.

“This is the first time such a technology is being used for cricket stadiums,” he added. KSCA vice president Sanjay Desai said the maintenance cost for the SubAir solution is Rs 7 lakh per annum. Desai said the company made a couple of presentations and hoped there would be many more, who would like to install he system in their stadiums, after getting the feedback from the KSCA on its performance. “It is not only interest shown in India by the way, there is an interest from many other cricket associations, both in the sub-continent as well as international,” he said.

Asked about the company’s inexperience in laying outfield for cricket, SubAir senior vice-president Kevin Crowe said the task was similar to the laying of a baseball outfield. “This system is used at some of the best stadiums worldwide including Wembley (UK), New York Mets, Seattle Mariners, BMO Field (Canada), Etihad Stadium (Manchester City) etc, and has over 500 installations,” Crowe said.

The system has also been used for NFL, 2014 FIFA World Cup in Brazil and would also be used in the upcoming FIFA World Cup in Russia (2018), he said. The solution quickly removes standing water, 36 times faster than drainage, virtually eliminating the need for extended game delays or cancellations due to wet outfield conditions, Rao said.

“The accumulated water evacuates at the rate of over 10,000 litres per minute, from the moment it begins to rain,” he added. Hyderabad-based Great Sports Infra, South Asia’s leading provider of turnkey solutions for sports infrastructure and also the exclusive licensee of SubAir for cricket stadiums worldwide has designed, supplied and executed the project. 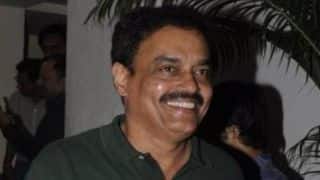