Sangakkara had earlier gone past Jayasuriya in terms of ODI runs scored.

Kumar Sangakkara became Sri Lanka’s highest run-scorer in One-Day Internationals (ODIs), going past Sanath Jayasuriya during his innings against New Zealand in the seventh and final ODI at Wellington. Sangakkara had earlier gone past Jayasuriya to become the third-highest run-scorer in ODIs. However, Sangakkara has played four matches for Asia XI and three for ICC World XI, in which he had scored a total of 259 runs.

While these matches were officially recognised by the ICC, and therefore counted in his overall ODI run tally, he did not have as many runs for Sri Lanka as Jayasuriya despite going past him in terms of total runs scored. The five leading run-scorers for Sri Lanka (not counting matches played for any other team) are:

Sangakkara is the third-highest run-scorer in ODIs as well, only behind Indian legend Sachin Tendulkar and Ausralia’s Ricky Ponting. Sangakkara is perhaps the most iconic Sri Lankan cricketer of all time, and is already their leading run-scorer across all formats of cricket. 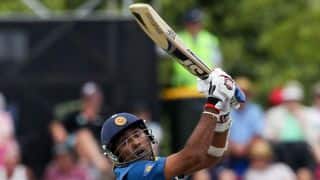