KXIP succumbed to an eight-wicket defeat at the hands of RCB in Mohali despite an unbeaten 99 from opening batsman Chris Gayle.

Kings XI Punjab bowling Ryan Harris said the failure to control the middle-overs against Royal Challengers Bangalore combined with a disappointing bowling effort resulted in them suffering their fourth defeat of the ongoing IPL 2019.

KXIP succumbed to an eight-wicket defeat at the hands of RCB in Mohali despite an unbeaten 99 from opening batsman Chris Gayle.

“Once again, we got ourselves into a good position where we can launch but we probably haven’t done that,” Harris was quoted as saying by Cricbuzz. ” the wicket slowed up a bit through the middle. We saw that with the way Chris Gayle started and then struggled towards the end. The RCB bowlers adapted pretty well and changed the pace on the ball.”

Harris also felt that KXIP haven’t been able to build on solid platforms and that they were perhaps 20 runs short of what would have been a winning total. Batting first, the hosts posted 173/4 with Gayle top-scoring.

Harris praised Gayle for his innings but lamented at no support from other batsmen. “We been in situations a few times now where we’ve were four down and we were probably 20 short of where we really should have been. Saying that, it was a pretty good innings from Chris Gayle. I thought he led the team really well (with his batting). To be able to do that, trying to control the middle. I guess we lost a lot of wickets as well during the middle, doesn’t really help as it stops the run rate,” he said.

Barring the spinners, KXIP pacers leaked runs in plenty with Mohammed Shami, Andrew Tye and Sam Curran all going for 10 per over.

Harris said it was disappointing to see them not being able to bowl well consistently.

“The disappointing thing for me is we bowled well in patches. We’ve had a couple of really good games which I saw as an improvement and then we saw the game out there today where plans that we made were a long way off. So we got to get ourselves back together quickly, we can’t afford to lose many more – saw the table, it’s pretty chock-a-block, it’s pretty close, so we can’t afford to drop too many games.” 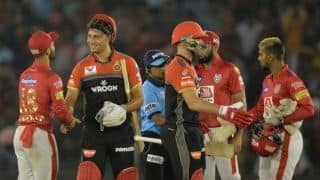