Harbhajan Singh tried to outsmart them with the bat, but failed to do so.

The pace bowlers of Kings XI Punjab (KXIP) were on a roll on Sunday night as they became a nightmare for the Mumbai Indians batsmen as they seemed to set up the whole arena like a minefield of pace with the batsmen having no clue about how to play. Speargun, Mitchell Johnson had nothing to say but all praise for the young fast bowlers, who made the job difficult for the Mumbai batsmen to chase down a healthy score of 178. IPL 2015 Previews

Sandeep Sharma, who bowled out the skipper, Rohit Sharma off a beautiful in-swinging delivery to trap him leg-before, was a beauty to watch. Harbhajan Singh tried to outsmart them with the bat, but failed to do so as the team slumped to an 18-run defeat. Johnson in an interview with iplt20.com spoke about the enthralling-win at Wankhede. Scorecard: Mumbai Indians (MI) vs Kings XI Punjab (KXIP) IPL 2015 Match 7 at Mumbai

“To get a win against Mumbai Indians in their home ground is very satisfying. We would have liked to have done it a little bit easier towards the end. But Harbhajan Singh came out and played really well. That is just the nature of Twenty20. Someone can come out and blast a quick fifty or sixty and change the course of the game. There are probably a few things that we could have done better at the end. Personally, I am a bit disappointed with how I bowled my last over. But as a team overall we played really well. We can be pretty happy with that. We did really well with the ball tonight and could have had them out under 100,” he said.

“You don’t normally see too much grass in India. To be able to see it here and see the ball swing and do a little bit off the wicket is nice. It suits our bowling at the moment. Our past experiences here helped us. We knew we get a bit of dew and moisture around and it tends to do a little bit later on in the night. It was still doing a little bit late in the game. I think we have seen that when we were in Pune as well, the ball was still swinging and there was enough in the wicket. Maybe that is going to be the theme of all the wickets in India in the IPL. We have some good bowlers who can swing the ball upfront and we have got the spinners to back it up. The wicket is really helping,” he added. IPL 2015: CSK, KKR, RCB, KXIP, MI, RR, SRH, DD full team details in IPL 8

Speaking on Sandeep Shrama and Anureet Singh‘s performance, he said, “I am really impressed with Sandeep and Anureet. They train really hard and always give it a hundred percent. You can never doubt those guys when it comes to giving it their all. They are just getting more and more experienced and the more games they play the better for them. It is really good to see them bowl the way they bowled against a quality side and going about what they needed to do as part of a bowling unit. Keeping things really simple has worked for them. I love seeing young guys like that who train really hard and it gives me a buzz.”

“It looks like they both have definitely gained a bit of pace than last year. They swung the ball last year as well and there is no difference there, but they have definitely added some more pace to their bowling. The wickets are definitely helping them. I would even trust them when it comes to bowling on a wicket where there isn’t going to be much of swing and movement. I still think they will be able to put the ball in the right areas and be able to hit the wicket hard. It is truly exciting and nice to see their progress, he added. IPL 2015 schedule: IPL 8 match time table with venue details

Being the most senior bowler in the team, the young guns are sure to come up to him for some tips and advice. On being asked so, he replied, “The guys come up to me while training and they like to listen when I am talking. They are not necessarily going to take in everything. I remember as a young guy, when I was taking things that might work and not going to work. It is about finding that balance. As a senior player, I like to lead by example on and off the field. I don’t necessarily talk a lot but when I do it is pretty important I guess.”

Speaking on his own performance last night, he said, “That was a brilliant start, but like I said I could have finished off the last over well. I have got good memories of playing here with the ball doing a little bit. I hadn’t swung the ball through the whole World Cup but all of a sudden I am here swinging the ball again [Laughs]. Swinging the ball is not something that I aim to do but it does feel nice when the ball swings. But, it is more about the bounce that I really get excited about. It is just a bonus that the ball is swinging for me.”

Finally, on being asked about KXIP’s chances of winning the title this year after narrowly missing out in the final, last year to Kolkata Knight Riders (KKR), he said, “We got into the final and we felt that we should have won that game. Coming into this season the guys have a bit more experience. I think we are in a good shape. We don’t have those big names but what we do have is guys that really put in a hundred percent and are willing to learn and seem to be getting better and better. I am impressed about how we have gone about it so far. You can see that the guys aren’t stressing out even under tense situations like today when Bhajji [Harbhajan Singh] was going berserk which was really impressive to me. The guys were focused on what they needed to do. They kept calm in that situation which is a good positive sign for us.” Indian Premier League (IPL) 2015: Complete coverage 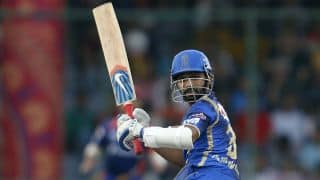