Lahore Lions can still qualify if they win against Perth Scorchers by 47 runs or 33 balls to spare.

Lahore Lions will face Perth Scorchers in the 19th match of the Champions League Twenty 20 (CLT20) 2014 at Bangalore on Tuesday. While the Scorchers are out of the tournament with their loss against Chennai Super Kings (CSK), Lahore Lions can still qualify if they win this game by 47 runs or 33 balls to spare.

The Pakistan T20 champions were well on course to give themselves a good advantage in their last game against Dolphins, where they had their opposition at 93 for 9. It is then that Robbie Frylinck started to bat with a ‘nothing to lose’ attitude, and scored a 27-ball 63 to seriously hamper the Lahore Lions net run-rate. Fans of CSK will be thanking Frylinck, for giving them a much better chance of making it to the semi-finals.

For Scorchers, things should have panned out better, after Mitchell Marsh powered them to a sensational win over Dolphins. Scorchers needed 12 to win from two balls, and Marsh hit two sixes off Frylinck to give his team a win, and others a memorable match. However, they haven’t continued their momentum from there onwards and were beaten by IPL sides Kolkata Knight Riders (KKR) and CSK. Both were games where the Australian T20 champions held the advantage at some moments, and they would be ruing their missed chances. They would like to end their trip to India with a win against Lahore Lions, and look to reunite as a stronger unit in the next edition of Big Bash League. CSK fans would certainly love that. 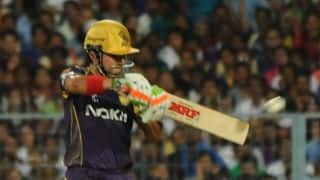