Catch live scores and live updates of the fourth match of CLT20 2014 here.

Khaya Zondo did not look convincing enough early on when the wickets were tumbling around him but looking back at what he did for his side, it can be said that it could be a match-winning effort. Dolphins lost far too many wickets, but one top-order batsman going on till the end has put them in a position where they will fancy their chances. Read Shiamak Unwalla’s report here.

Dolphins 164/7 | Overs 20
K Zondo 63 (50), R Frylinck 15 (6)
It’s a scorcher, says Rameez Raja in the commentary box as Frylinck ends the proceedings with a six on the last ball off Arafat. The over was started with a six as well. What a recovery by Dolphins!
Dolphins 148/7 | Overs 19
K Zondo 61 (48), R Frylinck 1 (2)
Paris allows only seven runs to be taken as Dolphins have six more balls left to take their score past 150.
Dolphins 141/7 | Overs 18
K Zondo 56 (44)
Khaya Zondo is playing one fine knock here. Arafat is smashed for a four and Dolphins have recovered well to post a challenging total. Phehlukwayo is cleaned up by the right-arm seamer.
OUT! A Phehlukwayo b Arafat 14 (11)
Dolphins 131/6 | Overs 17
K Zondo 50 (41), A Phehlukwayo 10 (8)
Perth have been impressive with their bowling effort but a short one by Behrendoff is smashed for a six, and the last ball, a full toss, is put away for a four.
Half-century for Khaya Zondo! Special knock by him…
Dolphins 118/6 | Overs 16
K Zondo 39 (37), A Phehlukwayo 8 (6)
Joel Paris comes back into the attack with the Dolphins looking to add as many runs as possible. Impressive over as the left-hander doesn’t give any room. Only six runs added.
Dolphins 112/6 | Overs 15
K Zondo 37 (34), A Phehlukwayo 5 (3)
One hundred up for the Dolphins in the 16th over of the innings. Khaya Zondo has been slow but somewhat effective on this track where the others have so far struggled. The right-handed batsman smashes two fours and the new batsman, Andile Phehlukwayo, gets hold of the last ball to smack a four off Behrendorff.
Dolphins 97/6 | Overs 14.1
K Zondo 28 (31)
And another one bites the dust! Jason Behrendorff surprises van Jaarsveld with a full toss, and the batsman looking to make most of the opportunity is caught at mid-off.
OUT! V van Jaarsveld c Harris b Behrendorff 7 (10)
Dolphins 97/5 | Overs 14
K Zondo 28 (31), V van Jaarsveld 7 (9)
Zondo cracks a four off Brad Hogg as the Dolphins batsmen are desperately looking to score quick runs. Eight runs scored in the over.
Dolphins 89/5 | Overs 13
K Zondo 21 (27), V van Jaarsveld 6 (7)
Mitchell Marsh continues. Impressive stuff once again as he keeps the opposition batsmen in control. Only six runs scored.
Dolphins 83/5 | Overs 12
K Zondo 19 (24), V van Jaarsveld 2 (4)
Zondo comes down the pitch to smash Hogg for a four through covers. Excellent placement. Six runs scored in that over.
Dolphins 77/5 | Overs 11
K Zondo 14 (19), V van Jaarsveld 1 (3)
Vaughan van Jaarsveld is the new man in at the crease but Dolphins would be hoping that Khaya Zondo leads their revival once again. Eight runs and a wicket in the 11th over of the match.
Dolphins 75/5 | Overs 10.2
K Zondo 13 (18),
Yasir Arafat comes back strongly after being hit for a six as he traps Daryn Smit in front of the wickets. It’s been Perth all the way so far in the day. The batsman tries to late-cut a ball that came in sharply.
OUT! D Smit lbw Arafat 21 (14)
Dolphins 69/4 | Overs 10
K Zondo 13 (18), D Smit 15 (12)
Another impressive over by the veteran Hogg as he gives away only three runs in the over.
Dolphins 66/4 | Overs 9
K Zondo 12 (16), D Smit 13 (8)
Impressive over by Mitchell Marsh as he keeps things quiet. Dolphins batsmen manage only four singles off the right-arm bowler.
Dolphins 62/4 | Overs 8
K Zondo 10 (12), D Smit 11 (6)
Veteran Brad Hogg is into the attack now. Perth Scorchers are one lucky side to have the likes of Hogg and Justin Langer with them. Smit lucky to get a four off a reverse sweep, as the man at short third-man was poor in the field. Nine runs scored off the over.
Dolphins 53/4 | Overs 7
K Zondo 7 (9), D Smit 5 (3)
Daryn Smit is the new man in for the Dolphins. Smart work by him to sneak a four on the leg side off Ashton Agar. Dolphins may have lost four wickets but they cross the 50-run mark in the seventh over of the game.
Dolphins 45/4 | Overs 5.5
K Zondo 4 (5),
HUGE shot for a six but then it is all over for Keshav Maharaj! Maharaj slams one straight down the ground off Behrendorff for maximum result. But the bowler has the last laugh as Maharaj, looking for more runs, makes room and is caught at third-man. Fine innings but Perth continue to remain at the top.
OUT! K Maharaj c Paris b Behrendorff 29 (22)
Dolphins 38/3 | Overs 5
K Maharaj 23 (18), K Zondo 3 (4)
Keshav Maharaj is leading Dolphins’ revival here. Smashes two consecutive fours off Mitchell Marsh to keep the momentum going. Good over for the South African side as 11 runs come off it.
Dolphins 27/3 | Overs 4
K Maharaj 13 (13), K Zondo 2 (3)
Some momentum for the Dolphins now as Maharaj smashes another four — this time through the leg side and ends the over with a four off a top edge. Yasir Arafat does well on the first four balls to keep the batsman quiet but the two boundaries have given the right-handed much-needed confidence.
Dolphins 19/3 | Overs 3
K Maharaj 5 (7), K Zondo 2 (3)
Maharaj dances down the trrack to smash a four through the covers. Dolphins need a lot many of them as they do not have enough runs on the board yet.  Five runs scored in the over.
Dolphins 14/3 | Overs 2
K Maharaj 2 (3), K Zondo 0 (1)
Keshav Maharaj and Khaya Zondo have a huge task on their hand to revive the side and lead the fightback. Perth have been excellent so far with their line and lenght.
Dolphins 12/3 | Overs 1.3
Cameron Delport is gone! The left-handed batsman smashes a six but is caught on the next ball. It’s Jason Behrendorff who has made the breakthrough!
OUT! C Delport c Whiteman b Behrendorff 8 (3)
Dolphins 4/2 | Overs 0.5
C Delport 0 (0)
Whatte start this is! Joel Paris knocks down Cody Chetty off the first ball as he bags his second wicket in as many balls!
OUT! C Chetty b J Paris 0 (1)
Dolphins 4/1 | Overs 0.4
C Delport 0 (0)
There’s the first wicket! Joel Paris cleans up Dolphins’ opener Morne van Wyk on the fourth ball after being hit for a four. Superb start this for the Scorchers!
OUT! M van Wyk b J Paris 4 (4)

Toss: Dolphins have won the toss and elected to bat.

Scorchers skipper Adam Voges isn’t disappointed on losing the toss. Feels they can chase like Kings XI Punjab managed the other night. Scorchers have left out spinner Michael Beer and gone ahead with an extra seamer.

Hello and welcome to CricketCountry’s live blog of the fourth match of the Champions League T20 2014 (CLT20) between South African Ram Slam T20 winners Dolphins and Big Bash League (BBL) champions Perth Scorchers. I am Devarchit Varma and I will be bringing live updates of the match. Read the Preview of the match here

Having been dispatched home win-less after three proper thrashings and a no-result in the previous edition of the CLT20, the Scorchers will leave no stone unturned to shore up their game and give a better account of themselves. In fact, Scorchers’ coach, Justin Langer, has vociferously commented that they are hoping to set the record straight by winning the tournament.

Against them are the T20 champions from South Africa. The Dolphins don’t have big names like the other franchisee from their country — Cape Cobras. But this team has stuck as a unit and emerged successful against all odds. Kyle Abbott is the only known face in the team.  Here are some key battles in the match between Dolphins and Perth 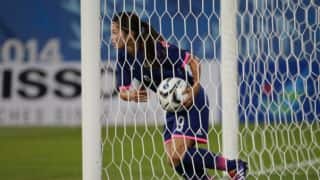