Catch the live updates of Day Five of the Duleep Trophy 2014-15 final between Central and South.

Our coverage of the fantastic final between Central Zone and South Zone comes to a close. Its a goodbye from us. Do stay tuned to our website for live updates on the 2nd Test between Pakistan and Australia, as well as the 1st ODI between India and Sri Lanka.

Hello and welcome to CricketCountry’s coverage of the fifth day of the Duleep Trophy 2014-15 final between Central Zone and South Zone at the Feroz Shah Kotla, Delhi. South Zone finished at a score of 184 for the loss of one wicket. South need another 140 runs to win with nine wickets and an entire day in their hands. KL Rahul scored a fluent 121 from 132 balls, and was unbeaten at the close of play along with Baba Aparajith, who was on 30 from 57 balls. For Central Zone, skipper Piyush Chawla was the only wicket-taker, dismissing Robin Uthappa to finish with figures of one for 51 from seven overs.

Resuming from a score of 62 for no loss at the start of the final session of the day, Rahul continued the carnage with the torrent of fours, bringing up his half-century in his 54th delivery. The partnership was looking strong, when Chawla struck for Central Zone, dismissing Uthappa on 30 as the latter tried to play a googly that was pitched well-outside off-stump, bamboozling Uthappa to make him send the ball back to the Chawla. The opening stand ended, four runs shy of the 100-run mark.

Baba Aparajith came to the crease, and was off to a rather slow start. The 20 year-old Chennai-born batsman took 12 balls to open his account, though he managed to hit a six and a four in his unbeaten 42-run innings. Rahul went on to bring up his sixth First-Class century off his 104th delivery, smashing a six over mid-wicket to reach the milestone. The second-wicket partnership was worth 88 runs at the time of close of play.

Central Zone were earlier dismissed for 403 runs after 105.5 overs, with Robin Bist remaining unbeaten on 112 from 174 balls. They resumed on the fourth day from their overnight score of 214 for the loss of four wickets, with Bist and Mahesh Rawat walking to the crease. Mahesh Rawat faced the first over of the day bowled by skipper R Vinay Kumar, sending the fourth delivery for a boundary towards the square leg boundary. The second over was a wicket-maiden bowled by Pragyan Ojha, who did the damage in the 66th over when he removes Mahesh Rawat for 16.

Pankaj Singh was the last batsman to walk in, and smashed the first ball that he faced for a six over long on. Pankaj was dismissed off the next ball however, as he attempted another big hit, but top-edged the ball towards cover, where Aparajith held on firmly. Gopal ended with figures of four for 60, the best among the Southern bowlers.

South Zone were off to a strong start in their chase of the 301-run target against Central Zone. While Uthappa was calm in his approach and took his time, scoring five runs off 25 deliveries, Rahul started attacking from the second over itself, in which he smashed three boundaries. Rahul scored five boundaries so far, and looks hungry for another big score to be added to his name. The 22 year-old batsman brought up a personal milestone when he completed 2,000 runs after scoring 32 runs from 28 balls, achieving the feat by dispatching the last ball of the ninth over bowled by Pankaj Singh for a mid-wicket four.

South Zone have certainly been the superior batting team in the final so far, and their fourth innings is a testament to that fact. It should be a cakewalk for the side to chase down the remainder of the target on the final day, if Rahul and Aparajith preserve their wicket. Central, on the other hand, will have to produce a terrific display of bowling and fielding if they are to swing things to their favour. 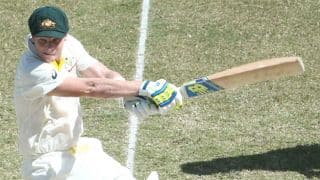