Catch all the Day Two updates of the match between Jharkhand and Goa here.

Hello and welcome to CricketCountry’s live coverage of Day Two of the Group C game of the Ranji Trophy 2015-16  match between Jharkhand and Goa, live from Keenan Stadium at Jamshedpur. A single ball was not bowled in the first day’s play at Jamshedpur as heavy rains had made the outfield heavy and could not be cleared through the day. As a result the umpires decided to abandoned the day’s play. The only hope now is that the rain stays away and the ground staff are able to clear the water from the ground. Both teams will want play to start on Day Two and push for a win. READ: Ranji Trophy 2015-16: Jharkhand vs Goa Day 1 play abandoned due to wet outfield

Live cricket scores Goa 141/2 | Overs 53 | Batting: Swapnil Asnodkar 67(151),Dheeraj Jadhav 8(23): Sagun Kamat is caught by Kumar Deobrat on the bowling of Samar Quadri. He made 25 with the help of one boundary and a six. Dheeraj Jadhav hits a well timed four. At stumps Goa were 141 for two. Swapnil Asnodkar and Dheeraj Jadhav are at the crease batting on 67 and eight. There is a high probability that this match will end in a draw since around 40 per cent of it was washed away due to water clogging in the outfield. OUT! Sagun Kamat c Kumar Deobrat b Samar Quadri 25(38)

Live cricket scores Goa 89/1 | Overs 34 | Batting: Swapnil Asnodkar 55(88), Sagun Kamat 0(2): Finally, the match starts in the latter part of the second day. Not a single ball was bowled yesterday and a considerable part of the second day i.e. today owing to large amounts of water getting accumulated in the outfield due to heavy rains. Goa won the toss and decide to bat first. Amogh Desai was caught by Sunny Gupta on the bowling of Samar Qadri when he was batting on 26. He played defensively, at a strike rate of 24.30. Other opener Swapnil Asnodkar is batting along with Sagun Kamat who is new to the crease. Swapnil has completed his fifty and is batting on 55 with the help of eight boundaries.  OUT! Amogh Desai c Sunny Gupta b Samar Qadri 26(107)

Toss: Goa, who chose to bat

Jharkhand skipper Varun Aaron, who was impressive in the previous match will want to take his form into this match as well. He is on the fringes of India selection for the upcoming Test series against South Africa after he was picked for the series against Sri Lanka, which India won. Shahbaz Nadeem too has been in excellent nick and his excellent seven-wicket haul in the earlier match will give him ample confidence in the remaining matches in the competition.

Goa on the other hand are unbeaten this season so far and will want to keep it that way. They however have conceded the first innings lead three times and that is something they have to keep an eye on going further in the tournament. 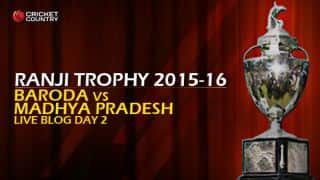