Welcome to CricketCountry’s live coverage of Day 1 of the Group A game of 2015-16 Ranji Trophy between Odisha and Assam at Cuttack.

Hello and welcome to CricketCountry’s live coverage of Day 1 of the Group A game of 2015-16 Ranji Trophy between Odisha and Assam at Cuttack. Assam, the surprise package of the tournament so far, sit smugly at the top of Group A with 10 points from 2 matches. Not only have they thrashed Rajasthan by a comprehensive margin of innings and 152 runs, they had also secured a crucial first-innings lead against defending champions Karnataka. Odisha, on the other hand, are on a mere 2 from 2 matches after conceding considerable first-innings leads to both Vidarbha at Nagpur and Maharashtra at Cuttack. Though Bengal and Haryana are on 1 point each, they have played a match less. Read all Ranji Trophy 2015-16 team previews here

Assam’s rise has been nothing less than phenomenal this season. An important aspect of their success story is the number of players that have performed: left-arm spinner Syed Mohammad took 7 for 44 in the first innings against Karnataka before hanging on for two hours to secure a draw; Pallav Das and Amit Verma scored fifties; Arun Karthik followed his match-saving 6-hour 115 not out against Karnataka with a match-winning 8-hour 151 against Rajasthan; Krishna Das had match figures of 10 for 55 against Rajasthan, while Arup Das had 7 for 65; and captain Gokul Sharma played three very crucial innings. READ: Ranji Trophy 2015-16: Assam surges

Odisha, on the other hand, have some work on their hands. Govinda Podder had stepped in with an emphatic 148 against Vidarbha, but the others (extras included) managed a mere 126 between them; it took a stellar effort from Anurag Sarangi to save the match. Podder scored 100 against Maharashtra as well (out of 267), and Odisha got away with a draw with 5 wickets down. A bolder declaration from Rohit Motwani may have earned Maharashtra an outright win. All in all, Assam are clear favourites going into the match. Odisha will have to play out of their skins to save this.

Live cricket scores Odhisha 52/5  | Overs 32| Batting: Abhilash Malick 4(20) , Anurag Sarangi 7(86): Odhisha have reached 52 for 5. They still need 40 more runs to clear the trail. Malick and Sarangi are on the crease. Odhisha fans would hope that this partnership continues till Odhisha get beyond Assam’s first innings score of 92. Odhisha’s lower-oder batsmen need to play better cricket.

Live cricket scores Odhisha 44/5  | Overs 30| Batting: Abhilash Malick 0(14) , Anurag Sarangi 7(80): Odhisha have lost their fifth wicket Biplab Samantaray on Arup Das’s ball. Looks like this match is still not over for Assam, their bowlers have brought them back into this game after the terrible failure of their batsmen. Krishna Das has taken four and Arup Das has picked one wicket so far. At present this match can tilt on either side. Anurag Sarangi is playing very slowly, he has made seven runs on 80 balls at a strike rate of 8.14. Odhisha needs a good partnership to come out of this precarious situation.

Live cricket scores Odhisha 35/4  | Overs 20| Batting: Biplab Samantaray 0(24), Anurag Sarangi 4(51): Odhisha’s batters have thrown water over their bowlers incredible performance in the first innings when they bundled out Assam for 92. They are 35 for four at the moment. Anurag Sarangi is batting very slow, he has faced 51 deliveries and has scored just four runs at a strike of less than 10.

Live cricket scores Odhisha 23/2  | Overs 5| Batting: Natraj Behera 23(17), Anurag Sarangi 0(6): Odhisha have started their innings after bowling out Assam for a meager 92. Their bowlers did their job, now their batters should ensure that they take their side to a big score so that they don’t have the headache to bat again in the match. For now, Odhisha have lost two wickets on a duck. They are batting on 23 for 2 at the moment.

Assam are bowled out on a petty score of 92. Tarjinder Singh offered good resistance but got out on 17 after having faced 89 balls. Assam lost their last three wickets for 16 runs. Their bowlers will have to bowl very well if they wish to fight their way back in the match.

Live cricket scores Assam 76/7  | Overs 46| Batting: Tarjinder Singh 15(78), Pritam Das 1(13): Odhisha will be hoping to finish  off Assam’s innings for under hundred. Tarjinder Singh should understand that merely playing out the balls wont help. Runs need to be scored or else he may well end up as the last man standing. He has made 15 runs at a strike rate of only 19.23.

Assam are losing wickets like cycles falling in a cycle stand. Syed Mohammed fails to judge Mohanty’s ball and gets bowled. Purkayastha who came after his departure has faced 12 balls so far but is yet to open his account. Mohanty has emerged as the best bowler for Odhisha till now, he has three scalps to his name.

Live cricket scores Assam 59/5  | Overs 34| Batting: Tarjinder Singh 13(47) , Syed Mohammed 1(18): Assam are in a precarious situation. They have lost half of their side for just 59 runs. They are in danger of getting bowled out for under hundred runs. Their lower order batters should make sure that Assam reaches a total in excess of 150 at least. Basant Mohanty is bowling well and has picked two wickets.

Live cricket scores Assam 49/4  | Overs 28| Batting: Tarjinder Singh 6(32) , Amit Verma 20(64): Assam has lost two more wickets in quick succession. They have been reduced to 49 for four. They are in danger of getting bowled out for under 200. Amit Verma and Tarjinder Singh are taking their time to settle. Basant Mohanty has picked two wickets till now.

Live cricket scores Assam 17/2  | Overs 8| Batting:  Pallav Kumar Das 10(24), Amit Verma 3(17): Look’s like Odhisha’s decision to field first is proving to be right. They have picked two early wickets. Assam is tottering on 17 for 2 currently. If Assam wants to get back in this match their middle-order batters will have to play very well.

Toss: Odisha, who chose to Field 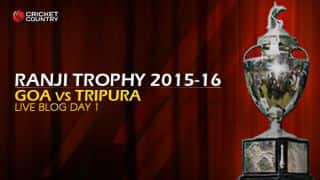