Catch all the live updates here.

As the knock-out stage comes alive in the domestic circuit of the Indian cricket, eight of the biggest teams would be out in the field to battle it out for a semi-final spot on the road to the finals to be crowned the undisputed champions of Indian cricket.

Among the four teams, Karnataka take on Assam at the Holkar Stadium in Indore, Vidarbha take on Tamil Nadu at the Sawai Mansingh Stadium in Jaipur, Andhra take on Maharashtra at the Chaudhry Bansi Lal Cricket Stadium in Lahli and Delhi takes on Mumbai at the DRIEMS Ground in Cuttack.

Karnataka, being the defending champions have been in top form in the group season, remaining undefeated. Batting being their strongest point, they turn out to be the favourites against Assam. For Vadarbha-Tamil Nadu tie, focus will be on a few of Tamil players as Murali Vijay, Abhinav Mukund, Baba Aparajith and the experienced bowling pro, Lakshmipathi Balaji while Vidarbha’s Mohammad Kaif would be the star man.

Andhra, who finished 2nd in their group have KS Bharath, who scored a triple-century in the group stage and will be the key man, while Kedar Jadhav will the man for Maharashtra in this interesting tie. Delhi would undoubtedly be the favourites owing to a number of good players with the likes of Gautam Gambhir, Virender Sehwag and Unmukt Chand, while Suryakumar Yadav and Shardul Thakur would be the talking point for Mumbai.

Karnataka: 302/2 vs Assam, Karnataka are putting up an excellent display with the bat so far, finishing on a score of 302 for two at the end of the opening day. Robin Uthappa became the second batsman to depart, getting caught and bowled off the bowling of Syed Mohammed on an impressive score of 153. Read the day’s report here

Tamil Nadu: 218/4  vs Vidarbha, The 140-run partnership between Murali Vijay and Vijay Shankar has come to an end, with the former getting dismissed four runs short of a century. Shankar was batting on 73 at the end of the opening day, as Tamil Nadu reached a score of 211 for four. Read the day’s report here

Maharashtra: 91  vs Andhra: 87/3, Andhra are only four runs behind the Maharashtra total, with seven wickets in hand, as they are well on top of the proceedings at the end of Day One. Read: Maharashtra’s dismissed for 91 during IPL auctions. 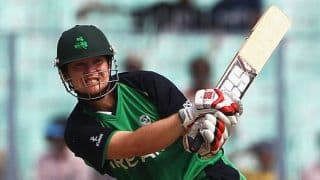 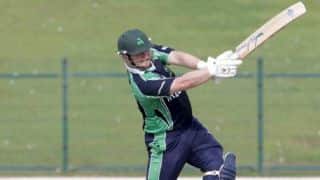