Catch the live scores and updates of West Indies vs England 2015, 2nd Test at Grenada Day 3.

By Sudatta Mukherjee and Pramod Ananth

(Alastair Cook and Jonathan Trott were unbeaten at the end of Day Two of the second Test, chasing a first innings total of 299. Catch the live updates here)

It’s stumps and England will be reasonably happy with their performance today, but they surely would not have wanted to lose wickets in a hurry as the close of play neared. The good news for them is that Joe Root is still at the crease and performing very well.

OUT! Ben Stokes is dismissed cheaply after he pulls a short delivery from Devendra Bishoo straight into the hands of Jermaine Blackwood, who is stationed at deep mid-wicket. England slowly collapsing at the moment.

Joe Root scores and excellent century and will look to put England in a commanding position after his side had lost two quick wickets. His partnership with Ben Stokes will be crucial in determining the lead the England get eventually.

OUT! Moeen Ali is dismissed for a duck. England lose two wickets in quick succession, which brings Ben Stokes to the crease. Mix-up between Moeen and Joe Root gets West Indies a bonus wicket. England have a substantial lead, but will look to build on it.

OUT! Gary Ballance is dismissed after a brilliant knock. Marlon Samuels dismisses him after bowls a beautifully flighted delivery outside off. Ballance tries to drive but takes the inside edge and crashes into the wickets. Moeen Ali is the new batsman.

England in an excellent position as they inch closer to wiping off the lead. Both Joe Root and Gary Ballance are well set and will look to get huge scores from here.

England go into the Tea break, still trailing West Indies by 46 runs with seven wickets in hand. Joe Root is batting on a half-century and Gary Ballance at the other end is nearing his 50-run mark. England on course to get a huge lead today.

Devendra Bishoo, who have been bowling consistently since morning, continues. Gary Ballance and Joe Root have steadied themselves in the middle.

Shanon Gabriel strikes again! This time it is Ian Bell. He has played on! The new batsmen is Joe Root. England has lost two wickets in quick succession. Root strikes well but hits the fielder on its way. Two runs.

The play resumes early. However, someone shoddy wicketkeeping as Dinesh Ramdin is unable to collect a delivery on the leg side and the balls runs for four. England cross 150 run-mark.  Two runs for Cook as he cuts the ball. Dot ball to end the over.

It is lunch time and Cook and Ballance are not out respectively. The match is evenly poised at this moment. Read our Lunch report here.

Devendra Bishoo might have struck again. Leg before appeal. Umpire says no. The West Indies have gone upstairs to review the decision. Replays show no edge. The ball is pitching outside off. Oh no! Umpire’s call as the ball goes and hits the top of the middle stump. Cook is safe. Couple of singles taken.

England lose their first wicket. Jonathan Trott tries to nick one on the off stump but Jermaine Blackwood catches it wonderfully. Bishoo strikes! Legbreak and well caught at second slip. England trail by 174 runs.

Jonathan Trott brings his 19th Test century. Lot of cheers around the ground. Single to end the over.

Alastair Cook completes his half-century. Jason Holder is bowling. England have also crossed the 100 run-mark. Trott is also inching closer to his half-century.  Dot balls. Oh! What a delivery by Holder. Huge appeal, beats Alastair Coo. But Denesh Ramdin is not going upstairs. Replays show the ball missed the bat by inches and brushed the thighs. Nice shot by Cook. Three runs. Last ball of the over. Dot ball to end the over. England trail by 194 runs.

Devendra Bishoo  is bowling the 36th over. He is eager to take early wickets. Both Alastair Cook and Jonathan Trott are in their 40s now. Dot balls. Trott is trying his best to put the ball between the fielders and take a single. However, West Indies have an attacking fielding.

The match has started in advance today as the first two days were halted many times by rain. Alastair Cook and Jonathan Cook are out in the middle. Kemar Roach is bowling and England is yet to lose a wicket.

Brief scores (at the end of Day Two):

England skipper Cook and fellow opener Jonathan Trott negotiated 26 overs without real alarm as the visitors reached  74 without loss at the National Cricket Stadium. Cook achieved a milestone during his unbeaten 37, going past former player Alec Stewart as his country’s second-highest run-getter in Test history with a tally of 8,484. Only Graham Gooch, the former opening batsman and captain, remains ahead of him in the list of prolific English batsmen with an aggregate of 8,900. Read Day Two report of the second Test between West Indies and England here

Earlier, England’s bowlers eventually overcame the determination of Marlon Samuels and an entertaining last-wicket partnership to dismiss the West Indies for 299 in their first innings on a rain-affected second day. Read: Alastair Cook becomes England’s second highest run-scorer in Tests during West Indies vs England, 2nd Test at Grenada 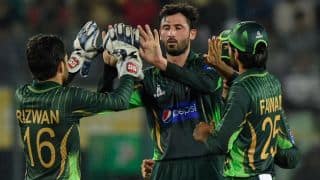