By Sandipan Banerjee and Amit Banerjee

That’s all from us at CricketCountry! Hope you enjoyed our coverage of the three-Test series. This is Amit Banerjee bidding you good night!

England have been once again denied an away series win since their history 2-1 victory in early 2012. They now head home, where they face ICC Cricket World Cup 2015 runners-up New Zealand in a three-Test series for two Tests, five ODIs and a T2oI. The West Indies, on the other hand, will be delighted with the result following a string of disappointing results in the recent past.

England retain the Wisden Trophy as a result of the drawn series, courtesy their 2-0 win in the 2012 edition.

Bravo and Blackwood seem to be heading towards victory with a sense of ease now, both smashing the ball towards the boundary ropes or over it more frequently now. And Bravo is dismissed off the last ball of the 62nd over, attempting to smash stokes over extra cover with four runs left for victory, and getting caught by Broad in the process! Fantastic innings comes to an end, and Bravo unfortunely will not get to hit the winning runs, the honour of which goes to Blackwood, who smashes Ali over mid-on to bring an end to the three-match series. Read: Match Report, West Indies vs England, 3rd Test at Barbados

Blackwood moves into the 30s as well as brings up the 150 for the West Indies with consecutive boundaries off Anderson. The pair at the crease don’t seem interested in carrying the game over to the fourth day. SIX! Bravo smashes Ali over long-on for a massive one to move to the 60s.West Indies surely on the brink of victory now!

#Eng have dropped a dolly here by not playing a proper spinner on this deck. Could have got Swanny out the @bbctms comms box. #WIvEng

Blackwood survives again, this time off the bowling of James Anderson when he plays a delivery towards short mid-on, where the fielder fails to collect the ball to break the partnership. 50 runs needed at the end of 55 overs, with a plenty of overs still left in the day for Bravo and Blackwood to guide their side home.

Someone tell Darren bravo that there is only one I V A Richards. #fistpump

And 11th Test fifty it is for Darren Bravo! And what a way to bring up the milestone, smashing the broad delivery through backward point for a four! Also brings up the fifty partnership between Bravo and Jermaine Blackwood, who is batting on 24 at the other end. The West Indian camp will be a relatively relaxed one right now with the pair well-settled at the crease by now and looking to go for the big hits. The patience has clearly paid off for Bravo, who took 115 deliveries and endured a lot of dry overs to get to the mark. West Indies need another 59 to win with a little under an hour left for the day’s play.

The West Indians have moved into triple figures, which should ease them psychologically for now. Both Bravo and Blackwood are beginning to loosen up a bit now, going for the big hits occasionally. Bravo moves into the 30s now, while Blackwood has moved to double figures. The partnership between the two is now worth 30. The hosts need another 82 to win, with an hour and a half left for the session to end.

Jermaine Blackwood is given a second life after Jos Buttler misses out on a stumping opportunity in the 36th over. The wicketkeeper might go on to rue to the blunder big time if Blackwood goes on to lead West Indies to victory along with Bravo. Terrific bowling by Joe Root however, going for an attacking line and occasionally surprising the batsman with the turn.

Darren Bravo breaks the six-over dry spell with a six off the first ball of the third session, smashing Joe Root over long-off for a six. Bravo follows it up with a boundary off the fifth ball of the over. And Chanderpaul is bowled! Anderson does it again, as the southpaw appeared unsure of his shot selection, playing the ball onto his stumps in the end! Chanderpaul departs for a nine-ball duck, and West Indies have lost their fourth, and the game is anybody’s at this stage.

OUT: Shivnarine Chanderpaul b Anderson 0 (9)

From here my colleague Amit Banerjee will take over the proceedings..

OUT! Third wicket for England. Marlon Samuels is clean bowled. Stuart Broad gets his a vital breakthrough.Good period of play for England. Six back to back maidens. West Indies are still 122 runs away from victory. And it is tea on Day Three of the final Test, with West Indies still having a good chance of chasing the target down.

The smallest target that West Indies failed to chase (i.e lost match) is 214 against Pakistan in Dhaka in 1959. [PAK’s home Test] #WIvEng

Good recovery by West Indies, thanks to this third wicket partnership.  Darren Bravo and Marlon Samuels are batting really sensibly. For England, its all about taking eight wickets from here. Moeen Ali is getting good turn. West Indies need 130 more runs from here.

In your dreams Peter! https://t.co/gFrtvXkZPK

Two quick wickets and England are back in the game. Both West Indian openers Kraigg Brathwaite and Shai Hope are gone in successive overs. First Jordon got rid of Hope LBW with and great delivery. It was full swinging, delivery, hit Hope right in front of the stumps. Batsman reviewed it, but it was plumb infront. Next wicket was taken by Moeen Ali thanks to an unbelievable catch by Jordon at first slip.

Chris Jordan is the best slip fielder in contemporary cricket. You heard it here first. #WIvENG

Lunch on Day 3: Kraigg Brathwaite successfully survives the James Anderson burst. England bowled only one over before lunch on Day 3. West Indies are 188 away from a well-deserved Test victory. If they manage to win the game, they will also level the series. Can they do it? We will find out after Lunch. READ Lunch Report here

Its all over for England. Jerome Taylor cleaned up James Anderson. England 123 all out. Since morning, England tried be a little bit aggressive, but only managed 85 runs and lost their last five wickets. So the target for West Indies is 192. Keeping the uncertainty of the West Indian batting line up in mind, it will be a tricky target for them. England will play one over before lunch.

WHAT A LAST few overs for England. From 90 for 6 England are now 98/9. Perumal first got the wicket of Stokes. Later Holder got Jordon and Broad in back to back deliveries. Their lead is 166. West Indies are looking favourites from here. Can Buttler add some important runs from here? His team desperately want some..

OUT! Stuart Broad b Jason Holder 0(1)

So the 1st hour of the Day 3 is done and dusted. England scored 51 for one. The lead is 158. They need another 150 runs from here to feel bit secure. The pitch is playing well. No demons in the pitch so far.

Jos Buttler has just hit a slight push of a shot into the stand for 6. That’s a fair bit of power there #WIvENG

OUT! Big wicket for West Indies. Gary Ballance gets out to Veerasammy Permaul. A very well-planned wicket. Permul was bowling out off-stump. The ball pitched out side off and came in. Ballance had to play it. He defended, the ball took the edge of the bat and carried to slip. A very good low catch by Bravo. Good start of the day for the hosts. The Lead is 130.

We are off and running in the Third Day of the Third Test. Jerome Taylor has started proceedings for West Indies. After the end of first over of the day, England are ahead by 108 runs. So basically they are 108 for 5. They need to extent the lead atleast to 250-300 runs. This will give James Anderson and other English bowlers some chance to defend the score.

Hello and welcome to CricketCountry’s live blog of the third day’s play of the third and the final Test between the West Indies and England, at Bridgetown in Barbados on Sunday. I am Sandipan Banerjee, and I will bring all the updates of the of the Day 3 of the Test match along with my colleague Amit Banerjee. READ: England finish on a shaky 39/5 at the end of Day 2

England were in serious trouble at a score of 39 for the loss of five wickets at stumps on Day 2 of the third and final Test against West Indies at Barbados. Pacer Jerome Taylor was the destroyer-in-chief of the England batting order, taking two wickets for 16 runs, while Shannon Gabriel, Jason Holder and Veerasammy Permaul chipped in with a wicket each. READ: West Indies vs England, 3rd Test Day 2 Highlights

England were given a 68-run lead at the start of their second innings, thanks to the efforts of James Anderson. Alastair Cook, who anchored the first English innings with a patient ton, failed to repeat the heroics as he was the next to depart, getting an edge off the bowling of Shannon Gabriel to the slips, where Kraigg Brathwaite held on to a safe catch. Openers Alastair Cook and Jonathan Trott were required to build on the lead steadily, and possibly remain unbeaten till the end of the day’s play. 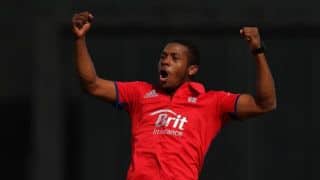 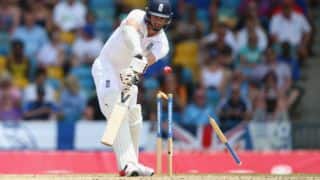