Catch the live cricket scorecard of the first Test between West Indies and England at Antigua.

West Indies take on England in the first Test at Antigua. Both sides will be itching for a win after a terrible campaign in ICC Cricket World Cup 2015. Neither side is high on confidence, nor do they have their most experienced hands. Chris Gayle, Dwayne Bravo, and Ramnaresh Sarwan are missing for West Indies, while Kevin Pietersen is still in the wild for England. Live Scorecard: England tour of West Indies 2015, 1st Test at Antigua Day One

According to IANS, England have struggled to find a new opening partner for captain Alastair Cook since Strauss retired in 2012, with the likes of Nick Compton, Michael Carberry and Australian-born Sam Robson all tried and discarded. Cook’s next partner appears to be one of Trott or Yorkshire’s Adam Lyth, who was the leading run-scorer in the top division of English county cricket last season. Live Updates: England tour of West Indies 2015, 1st Test at Antigua Day One

“We’re lucky in one sense that we’re choosing between two very good players,” Cook was quoted as saying by cricket.com.au on Sunday. Ever since Straussy announced his retirement we haven’t quite found consistency in that position so whoever gets that chance gets the opportunity to try and nail that down. But we haven’t discussed that yet. Trott has almost demanded selection and it’s great for me to see him back in an England shirt. He’s a great guy and if he gets his chance he’ll be desperate to do well. It would be his 50th game as well which is a great achievement if he gets there,” Cook said. READ: Kevin Pietersen could disrupt England team says John Buchanan

“You don’t know 100 per cent if he’ll be fine until he’s put out in the environment but Trotty’s done everything we’ve asked of him. He feels confident in himself and he’s just looking forward to taking that next step. What we do know is he’s a quality player. You don’t have his stats and that weight of runs behind you without being a quality player,” said Cook. READ: Ottis Gibson reappointed England bowling coach for West Indies series 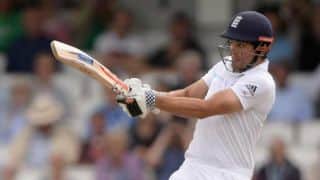