Pakistan extended their lead to 369 runs at lunch on Day 3 of the second Test against Australia during a session that was witness to a bizarre run-out of Azhar Ali on Thursday. Resuming on their overnight total of 144/2, Pakistan reached 232/4 with Asad Shafiq (42*) and Babar Azam (34*) the two unbeaten batsmen.

The highlight of the session though was a comical run-out. Batting on 64, Azhar steered a ball from Peter Siddle between gully and the slips and down to third man. After a couple of steps out, he stopped and slowly strolled down the pitch to punch gloves with Shafiq, thinking that the ball would race away to the boundary for four. Mitchell Starc jogged after the ball, saw it hold up before the boundary line and threw it back to Tim Paine who collected it, saw that the batsmen were unaware and broke the stumps while appealing for a run out.

After several reviews the third umpire ruled Azhar out.

This was shortly after Nathan Lyon repeatedly tested Haris Sohail and leaving him frustrated enough to step out for an inside-out shot. He was beaten as the ball spun past his bat resulting in him being stumped on 17.

Shafiq was tentative to start with, edging a few before finally pulling Siddle for a boundary. Marnus Labuschagne also caught attention, hopping while fielding at short-leg that saw him making a meal of an easy catch from Shafiq and then copping a blow on the arm.

Meanwhile, as Azam settled in, he ventured out, smoking two sixes, both against Lyon.

For Australia, the session began with much promise before Pakistan took control as they wasted both their reviews. There was a small matter of Lyon having bowled his 20,000th delivery in Test cricket without stepping over the line. 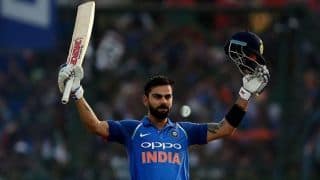 India vs West Indies: Virat Kohli on the cusp of breaking yet another record in ODIs 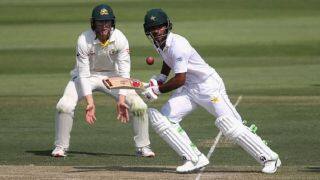 I tried to score runs my way: Fakhar Zaman