Hello and welcome to our live coverage of Match 34 of ICC Cricket World Cup 2019 between India and West Indies at Old Trafford Cricket Ground, Manchester on Thursday.

They may be undefeated in the tournament but suddenly, there’s a bit of creakiness about India. As exposed by the Afghanistan spinners in the previous game, the muddle surrounding India’s middle order came to the fore. The issue isn’t alarming but against a side like West Indies – their next opponents – who have the tendency to surprise teams (look no further than the game against New Zealand), India would have to rectify that little vulnerability.

West Indies don’t have spinners of Afghanistan’s calibre. There’s Ashley Nurse and the now-rarely used off spin of Chris Gayle, and besides, it’s all up to the fast bowlers. The pace battery that dismantled Pakistan for 105, rocked Australia’s top order and reduced New Zealand to 7/2. That said, India’s batting, in fact, their top three is far superior than any other. But the ones who follow, not quite you’d say. ALSO READ: Jasprit Bumrah, Kohli’s go-to man

With Australia becoming the first team to qualify for the semi-final, and England’s consecutive losses making the tournament interesting, India, currently with nine points, would be eager to take another step closer to the top four. West Indies, meanwhile, are almost out of the tournament, but virtually stay alive if they win this and till the time the teams in the top bracket of the points table don’t advance. A loss however, and West Indies will join Afghanistan and South Africa on the way out. Such is the nature of the format. ALSO READ: Brathwaite the berserker surprises, stings and almost stuns

If India and West Indies’ previous games are anything to go by, there are no favourites. Afghanistan gave India a scare and West Indies almost pulled off a miraculous chase against New Zealand. India still have the edge though, mentally. Not only because they are yet to taste defeat, but because of the terrific success they had against West Indies in 2018 – one of West Indies’ worst years in cricket. India won the five-match series 3-1 led by Virat Kohli‘s hat-trick of centuries. But besides winning the one game, West Indies also tied one. That is what India need to avoid, West Indies’ ability to deliver a wake-up call.

India though aren’t the only team with middle-order woes. West Indies have been constantly bogged down by the failure of their. Against New Zealand, three top-order batsmen combined for two runs and the other three accounted for 242. Against a formidable bowling attack like India’s, West Indies batsmen have a mountain to climb. 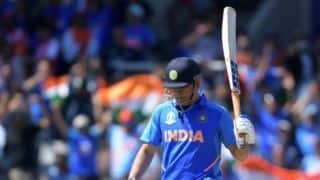