In the game No 51 of Indian Premier League (IPL), Mumbai Indians will take on Delhi Daredevils at Wankede stadium, Mumbai.  Delhi have been very disappointing in IPL 7. They have won just two games till now. To make it worse for Delhi, they have lost close games which they could have won. Catch the Live Scorecard of the Mumbai Indians vs Delhi Daredevils IPL 2014 match here

On the other hand, Mumbai have been inspired by the stellar performance of batsman, Lendl Simmons. The right-handed West Indian batsman has been on fire for them. In their last game against Kings XI Punjab, he scored the first century of IPL 7. It was a truly remarkable knock, as he played shots all over the park. Other than him, Kieron Pollard has been in fine run of  form. The burly all-rounder has also taken some fine catches in the deep. Catch the Live Blog of the Mumbai Indians vs Delhi Daredevils, IPL 2014 match here

For Mumbai, Harbhajan Singh has been one bowler who has delivered consistently for them.  Their main wicket-taker Lasith Malinga though, is now in England to represent his country. Mumbai need to desperately win this game, for them to have any chance of qualifying for playoffs. 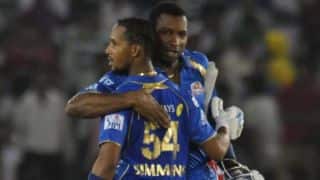