Pakistan‘s new head coach Mickey Arthur vowed on Thursday to lift his new team to the top of world cricket rankings as he did with his native South Africa. He arrived in Lahore on Wednesday night to take over his new role, which had been vacant since the resignation of Waqar Younis in April following Pakistan’s disastrous first-round exit from the World Twenty20. “My short term plan is to create a cricket culture and the long term plan is to make the team number one in all three forms of the game,” he said. Pakistan are currently third in Tests but their standing in limited overs cricket — ninth in one-day internationals and seventh in Twenty20 — leaves much room for improvement. Full Cricket Scorecard: England  vs  Pakistan , 1st Test match, Pakistan tour of England, 2016

“Our Test cricket seems to be very good at the moment,” said Arthur. “If we can play well outside the subcontinent that means that the team’s really going forward.” The 48-year-old had a glorious coaching career with South Africa between 2005-2010, taking them to the summit of Test rankings in 2008, following series wins in England and Australia. He also lifted them to number one in one-day cricket in 2007. His19-month tenure as Australia’s coach ended on a bitter note when he was sacked a few days before the 2013 Ashes in England after his team crashed out of the group stages of the ICC Champions Trophy. READ: Former PAK players advice Arthur to avoid media statements

Arthur’s first task as Pakistan’s coach will be to help the team face an ascendant England side on their home turf in a four-match Test series starting at Lord’s on July 14. Pakistan also have series against the West Indies in United Arab Emirates (September-October), two Tests in New Zealand (November) followed by three Tests and six one-day matches in Australia. The South African, who has been given a two-year contract, which is negotiable after 12 months, also praised fast bowler Mohammad Aamer, due to play his first Test since being convicted in a spot-fixing case on the team’s last tour to England in 2010.

“Aamer is a fantastic professional,” he said. “I am only interested in making him the best and other stuff is irrelevant to me and what people say about him.” 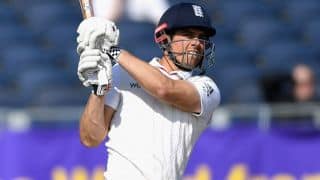