Misbah said that they have an answer for Herath this time as everybody is working hard.

Karachi: Pakistan Test captain Misbah-ul-Haq believes that his side will successfully be able to defend and play against Sri Lankan spin mystery Rangana Herath in the upcoming three-match Test series beginning on Wednesday.

Herath has been Pakistan’s tormentor-in-chief as he has claimed 88 wickets in just 17 matches against them, making him the third most successful bowler against the team. Shahid Afridi wants change in Pakistan domestic cricket structure

Misbah said that they have an answer for Herath this time as everybody is working hard on how to defend him. He insisted that they only struggled against him because the Sri Lankan had got a good hold of the conditions, the Dawn reported. PCB accept confession statement from Slaman Butt

The skipper added that it is important for them to play Herath well in order to get a better result.

Herath requires only three more wickets to surpass Shane Warne, and only 12 more scalps to become the first bowler in the world to pick up 100 wickets in Tests against Pakistan. Saeed Ajmal ignored: Is this the beginning of the end for Pakistan’s ace spinner? 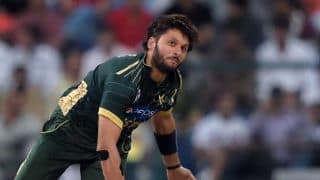