Mitchell Marsh added the game itself doesn’t change it's just the conditions that change.

Mitchell Marsh, Australia’s batting all-rounder recently said that his team will change their approach to batting when they will play some day-night Test matches this summer. It is expected that Australia will feature in two day-night Tests between South Africa and Pakistan in 2016-17. Marsh was quoted as saying, “These days Test wickets are quite flat and it’s certainly a grind for the bowlers. We saw that when the (Adelaide Oval) wicket had a little bit in it you had to rein in your shots and play the game in a different way or be really positive. When a wicket is doing a bit like that there’s always going to be a good ball that has your name on it. So you’ve got to be really positive without going over the top. That’s probably the biggest thing we all learnt.” FULL SCORECARD: Mumbai Indians vs Royal Challenges Bangalore at Mumbai

Marsh told Cricket Australia’s official website, “The big thing is it’s the same game, it’s a cricket ball. As a bowler you’ve still got to put it in the right areas, as a batter you’ve got to watch the ball hard and score as many runs as you can. The game itself doesn’t change it’s just the conditions that change. We’re used to conditions changing on us all the time with the amount of cricket we play all around the world.” ICC World T20 2016: India will be under great pressure at home, says Mitchell Marsh

“We don’t let that be a distraction to us. We just get on with it and try to win every game that we play. Wherever we play and whoever we play against it’ll be a great spectacle for the crowds and that’s what we want. We want to entertain people.” 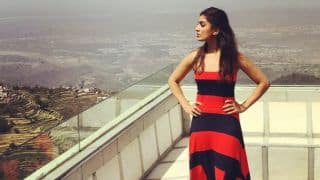