Australia have slipped to fifth place in the Team rankings, while Pakistan are just two points behind sixth-placed Sri Lanka.

Pakistan fast bowler Mohammad Abbas, who claimed a 10-wicket haul in the second Test against Australia in Abu Dhabi, jumped to a career-best No. 3 in the latest ICC Test bowler rankings on Sunday.

Abbas returned with figures of 5/33 in the first innings and 5/62 in the second as Pakistan romped to a massive 373-run victory, their biggest win in terms of Test runs in history.

Abbas is left with only England swing bowler James Anderson and South Africa pacer Kagiso Rabada ahead. The 28-year-old Abbas, who is yet to go wicketless in any of his 19 Tests, is the 10th bowler in Pakistan history to cross 800 points.

Off-spinner Bilal Asif, who picked nine wickets in the two Tests against Australia was 52 in the rankings. Opening batsman Fakhar Zaman made great strides after his 94 and 66 in the Abu Dhabi where he made his debut. Abbas is ranked 68th.

Australia opener Aaron Finch, who made his Test debut in Dubai, jumped 15 spots and is at 59th position in the rankings.

After the disastrous loss in Abu Dhabi, Australia have slipped to fifth place in the Team rankings, while Pakistan are just two points behind sixth-placed Sri Lanka. 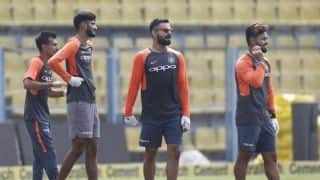