David Warner and Moises Henriques used their long handles to good effect to boost Sunrisers Hyderabad (SRH) to a terrific 135 for three against Royal Challengers Bangalore (RCB) in the rain-shortened Match 52 of Indian Premier League (IPL) 2015 at Hyderabad on Friday. Persistent rain caused a late start, and  Henriques was the aggressor, hammering a lacklustre RCB bowling to all ends of the large Hyderabad ground. Live Scorecard: Sunrisers Hyderabad vs Royal Challengers Bangalore, IPL 2015

SRH did not get off to the best of starts, with Shikhar Dhawan mis-hitting a short ball from David Wiese straight to Ashok Dinda at mid on. However, his dismissal proved to be a blessing in disguise, as Henriques came out in murderous mood. Live updates: Sunrisers Hyderabad vs Royal Challengers Bangalore IPL 2015 Match 52

Henriques benefited from two dropped chances, one easier than the other. First, he hit Harshal Patel down Mandeep Singh’s throat only to see an easy chance grassed. Later, he sliced one from Mitchell Starc into the hands of Sarfaraz Khan at point, but the 17-year old failed to latch on to a simple catch. IPL 2015 schedule: IPL 8 match time table with venue details

At the other end, Warner took a back seat to Henriques’ blitz, but he was far from overshadowed. A standout shot was a reverse slog against Yuzvendra Chahal which went for the 600th six of IPL 2015. He followed it up with an off drive, once again hit right-handed, off the next ball. IPL 2015 Points Table & Team Standings

Henriques went on to score his fifty off 20 balls, missing out on the joint fastest fifty of the tournament by one ball. Warner’s half-century took 10 balls more, but it was no less destructive for SRH. Wiese took the second wicket as well, getting Henriques to snick one behind to Dinesh Karthik. Indian Premier League (IPL) 2015: Complete coverage 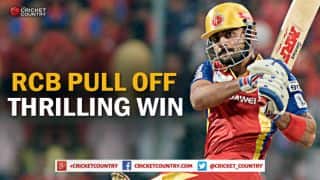