Amidst the euphoria of a World Cup win, the question that left several fans confused was MS Dhoni's decision to bat ahead of Yuvraj Singh.

In the final of the ICC World Cup 2011 against Sri Lanka, the match was still hanging in the balance after India had lost their top three for 114 in chase of 275. Lasith Malinga had removed both Virender Sehwag and Sachin Tendulkar inside seven overs and then Virat Kohli ended up being caught and bowled by Tillakaratne Dilshan.

After the fall of third wicket, Yuvraj Singh, who was in terrific form, should have walked in. However, it was the India captain MS Dhoni who promoted himself to the No. 4 spot and joined Gautam Gambhir taking the India chase forward.

As it turned out, the duo added 109 runs between them before Gambhir fell agonisingly short of a century on 97. Dhoni then took India over the line alongside Yuvraj to seal a memorable win, with a six, at the Wankhede Stadium.

Amidst the euphoria, the question that left several fans confused was Dhoni’s decision to bat ahead of Yuvraj. Seven years after later, Dhoni has thrown light on the issue saying familiarity of facing Muttiah Muralitharan played an important role behind the call.

“I knew most of the bowlers of Sri Lanka as they were part of the Chennai Super Kings earlier,” Dhoni said on the sidelines of an event in Dongargaon. “I promoted myself because Muralitharan was bowling at that time. I have played him a lot in the CSK nets and I was confident that I will be able to score runs freely against him. That was one of the main reasons why I pushed myself up the order during the final.”

Leading India to two World Cup titles, Dhoni is regarded as one of the greatest ever India captains. Dhoni said his ascension to India captaincy and subsequent success has worked in changing the mindset of selectors who were earlier reluctant to trust the team leadership into the hands of a wicketkeeper.

Before me, selectors were quite reluctant to make stumper as captain saying he will be burdened too much. But I changed their view with my successful tenure as the captain. Keeper is in the best position to help any captain analyse the match. He is very close to the action and can accordingly guide the team leader about many things. He is an asset for any captain. He can release the burden on the captain with his inputs, he said. 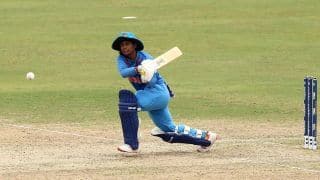