Kolkata: On the eve of Mahendra Singh Dhoni‘s 36th birthday, his childhood coach Chanchal Bhattacharya on Friday said the former India captain is still good enough to play in the 2019 World Cup. Bhattacharya also spoke about his fourth One-Day International (ODI) knock against the West Indies, and said it was an aberration. “Dhoni still has it in him to play the 2019 World Cup,” Bhattacharya told IANS over phone on Friday. A day after India, led by skipper Virat Kohli, won the five-match ODI series against the West Indies 3-1 (one match did not have a result), Dhoni celebrated his birthday with talks doing the rounds about his failed 114-ball 54 innings which led to India losing to the West Indies in the fourth rubber. Happy Birthday MS Dhoni: Yuvraj Singh, Suresh Raina, others wish Mahi

Chasing 190, India lost early wickets and it was on Dhoni — known to be a lethal finisher — to see off the tie. But the decorated wicketkeeper batsman dabbled at the crease scoring his slowest half-century in 16 years. He managed just one boundary. The essay drew a lot of flak and questions surfaced once again on whether India’s World Cup winning captain should call it a day and not continue till the 2019 World Cup.

“Everyday is not a Sunday,” Bhattacharya said when asked about the innings. “It was just an off day for him. Yes, he was not up to the mark in that innings. He missed a few sixes and India did not win. If he had won that match for the country, he would have been the best finisher again,” the coach maintained. Bhattacharya added that Dhoni, who has won a trio of ICC events — 2011 50-over World Cup, 2007 T20 World Cup and the 2013 Champions Trophy — besides taking India to the No. 1 Test rankings, will call it a day when the time is right and no one needs to remind him that he is out of gas. MS Dhoni: I am like wine, getting better with age

“He is still one of the fittest players around and he is someone who will step down when he feels the time is right. No one has to tell him when to retire. Like he relinquished his captaincy and all of a sudden left Test cricket saying ‘Usme abh maza nahi aa raha [I am not enjoying it anymore]’,” said Bhattacharya, who was Dhoni’s batting coach during his formative years.

Meanwhile, birthday wishes came thick and fast from most of his current and former teammates, as they took to Twitter to wish the Ranchi stumper well. Teammate Yuvraj Singh, also in the West Indies with the side, tweeted: “Many happy returns of the day to Mr. Helicopter @msdhoni have a great day buddy, the cake awaits you.” Virender Sehwag, one of the candidates to take over from Anil Kumble as India coach, also wished his former captain. Kohli, Dhoni and co. spend quality time at Bravo’s place post 2nd ODI win

“To a man who has given Indian fans innumerable moments of joy,#HappyBirthdayMSD. May the helicopter continue to fly and land in our hearts,” Sehwag said. India women’s team captain Mithali Raj, currently playing the World Cup in England, also wished Dhoni. “Wish u a very Happy Birthday! Have a great year ahead! @msdhoni.” 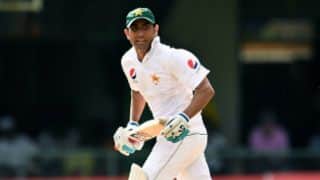