Major concerns were harbouring around MS Dhoni s form with the bat before 2019 began. He had scored just 275 runs from 20 matches in the 50-over format. At the start of the new year, Dhoni smashed three consecutive half-centuries in India s ODI series win against Australia to firmly regain his spot in the ICC World Cup 2019 squad. Besides, his vast experience, Dhoni s guile behind the stumps has been game-changing.

“MS Dhoni’s experience can’t be questioned. There are not many better than him when it comes to handling situations with maturity. He has been a guiding force for the youngsters. India needs his experience to guide the middle-order batsmen,” former India pacer Lakshmipathy Balaji told India Today on Tuesday. (ALSO READ: Kohli, Bumrah to return, workload in focus as selectors to pick squad for Australia series)

“Virat Kohli, Rohit Sharma and Shikhar Dhawan bring in experience to the top-order. What about the middle-order? MS Dhoni will be a big influence in this team. He is a player who always takes every game seriously and makes sure he gives it his all.” (ALSO READ: India should include Rishabh Pant in the playing XI for the World Cup: Mohammad Azharuddin)

India have five more matches in ODIs coming against Australia at home before they board they flight to England for the global event which begins on May 30. However, before the showpiece event, all eyes will be on Season 12 of the IPL which gets underway on March 23. “Last year, he played higher-up the order for Chennai Super Kings. His batting form was phenomenal. The way he batted, the way he hit the ball was phenomenal. But you never know with MS. He always comes up with a few surprises. We will wait and see the surprises at the World Cup,” Balaji said. 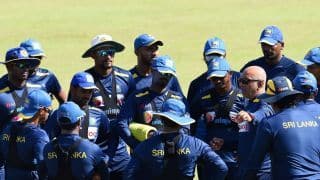 Pakistan Super League 2019: All you need to know