India wouldn't want to give the Australians the upper hand in what will be the last series before the World Cup.

New Delhi: Two cricket World Cup wins in 44 years, yet the flame carried in the hearts and minds of savants in India burns. As a top tier team, India once again is in search of the Golden Fleece.

Workload management of the stars will be on top of the mind when the selectors meet in Mumbai on Friday to pick the squad for the white ball series against Australia.

The Indian team is set to play two T20Is and five ODIs against the Aussies in what is set to be the last set of international games that the boys get before going into the ICC World Cup 2019 in England, starting on May 30. The only practice they will get after this is in the Indian Premier League (IPL). (ALSO READ: Cheteshwar Pujara reveals the best sledge from an Australian player)

The selection committee will look at keeping the right balance as they would not only wish to give the senior guys ample rest before going into the showpiece event, but also wouldn’t want to give the Australians the upper hand in what will be the last series before the World Cup. India has been playing incessantly overseas and the fast bowling wolf pack has had no real rest.

BCCI sources said: “Workload management of the senior players will definitely be the main area of discussion as we all know that the Indians have been on the road and the selectors and team management have made a conscious effort to ensure that the players get ample rest between games and series. (ALSO READ: India should include Rishabh Pant in the playing XI for the World Cup: Mohammad Azharuddin)

Like you saw, regular skipper Virat Kohli was rested for the back end of the New Zealand series. You might see Rohit Sharma rested for some games here.

“But it is also important to note that the Indians would want to keep the foot on the pedal and ensure that they don’t give the Australians any momentum going into the World Cup. A good series against India would mean a confidence booster for the team. So, there has to be a balance so that the composition of the team is not affected,” he explained.

While Rishabh Pant is almost certain to get more game time, it will be interesting to see if someone like Ajinkya Rahane gets one last go to seal a place in the World Cup squad. In the bowling department too, Jasprit Bumrah is almost certain to make a comeback after a well-earned rest during the New Zealand series. (ALSO READ: Virat Kohli will be one of the greatest ever cricketers, if not the greatest ever: Kumar Sangakkara)

In fact, head coach Ravi Shastri has already made it clear that players will be monitored even during the IPL.

“We’ve been in touch with the BCCI and CoA in this regard. We have certain plans in place and we’ll be looking to follow them. Usually, the two months of IPL are seen as relatively free months for me and I can just sit down and enjoy the cricket, watch out for new, young talents that keep emerging. But this IPL will be about monitoring the players, keeping the World Cup in mind,” he said in a recent interview. 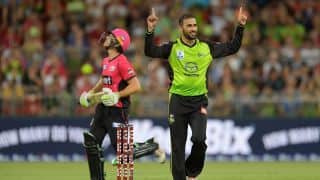