Mumbai Indians (MI) vs Kings XI Punjab (KXIP), IPL 2015 Match 7 at Mumbai, Preview: Both teams aim to get off the mark

Mumbai Indians will enjoy the home advantage, with the match being played at the Wankhede Stadium.

Mumbai Indians (MI) will face off against Kings XI Punjab (KXIP) in the seventh match of Indian Premier League (IPL) 2015 at Mumbai on Sunday. Both teams are playing their second match, with MI having lost their opening game to Kolkata Knight Riders (KKR), and KXIP going down to Rajasthan Royals (RR). IPL 2015: Schedule with venue details

Mumbai will be disappointed at their loss, given that the batsmen — led by Rohit Sharma and backed up by Corey Anderson — managed to put up a decent total. They will be concerned at their bowlers’ inability to make frequent or telling breakthroughs. Harbhajan Singh was a far cry from his usual canny self, while Pragyan Ojha was largely ineffective. Vinay Kumar and Lasith Malinga bowled reasonably well, but even they were unable to keep the runs down at the death. Read: KKR defeat MI by seven wickets

On the other hand, KXIP will want to get over their off day in the field. Skipper George Bailey has attributed the loss to RR to the shuffled batting order, and he will want to amend that this time around. In Murali Vijay and Virender Sehwag, KXIP have an opening combination that can score quick runs, but their real lynchpins are Glenn Maxwell and David Miller, both of whom flopped in the last match. Read: RR defeat KXIP by 26 runs

KXIP will be encouraged by the bowling of their Indian pacers. Sandeep Sharma and Anureet Singh were accurate and effective. Akshar Patel was not at his economical best, and Karanveer Singh suffered the brunt of James Faulkner and co. Mitchell Johnson was the fifth bowler used, and though he did a reasonable job, he will want to ensure better figures the next time around. IPL 2015: Points Table and Team Standings

The match will be played at Mumbai, so the home advantage for MI cannot be discounted. Rohit’s excellent form and the depth in their batting line-up will be a stern test for KXIP’s relatively inexperienced bowling attack. But the threat presented by Maxwell and Miller will doubtless play on MI’s mind. A close match is on the cards if both teams play to their full potential. IPL 2015: Complete Coverage 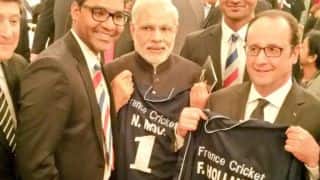