Rathour had earlier applied for NCA batting consultant and U-19 batting coach's position but his application was put on hold due to conflict of interest issues.

As expected, incumbent Sanjay Bangar lost the race with former India opener and the erstwhile national selector Vikram Rathour all set to be the new batting coach of the Indian cricket team after chairman of selectors MSK Prasad announced the recommendations following the conclusion of the four-day process at the BCCI headquarters in Mumbai on Thursday.

India s batting department has been much turmoil under Bangar. The No. 4 debate became the hot talking point at the ICC Cricket World Cup 2019 and with his inability to build a settled batting line-up despite being in the role for the more than two years, Bangar s position came under immense scrutiny.

If you see in the last five years, there is definitely some improvement, but looking ahead with the Test Championship and the two T20 World Cups (2020 in Australia and 2021 in India), we thought there should be some freshness in that department (batting), so that s the reason why we went ahead with Vikram Rathod as first choice, Prasad informed.

While Rathour has been the assistant coach of Kings XI Punjab and has had short stints at Punjab besides being the director of Himachal Pradesh Cricket Association (HPCA), the former India opener does not have any international experience to his credentials.

He has got enough experience behind him. Apart from that, he has been doing a lot of assignments with the National Cricket Academy, so we are convinced with his skill sets and thought that he would be our first preference as of now, Prasad backed the committee s decision.

Another bone of contention behind Rathour s selection is his past history of having to deal with several conflict of interest issues. The Committee of Administrators (CoA) twice rejected him for coaching positions in junior level cricket. On all occasions, conflict of interest was cited as the reason behind their decisions.

Rathour had earlier applied for NCA batting consultant and U-19 batting coach’s position but his application was put on hold as his brother-in-law Ashish Kapoor is the chairman of U-19 selection committee.

So, this was discussed at the CoA meeting also. Now, his brother-in-law is a chief selector of the junior team. This is batting coach of men s senior team, so we do not think that there is no conflict (in his case), BCCI CEO Rahul Johri, also present at the announcement, said.

Prasad added: During the interview process, we asked every candidate about the conflict of interest because they have agreed and that s how we went ahead with the process.

The shortlisted candidates will now be called individually and informed officially. Candidates on second and third position in the list will be sent to the National Cricket Academy (NCA) in Bengaluru where head Rahul Dravid will decide if he has to use their services.

We will try to make the appointed candidates available at the earliest. They have to be available before the start of home season starts (September 15). Before that we will complete all the formalities, Johri said. 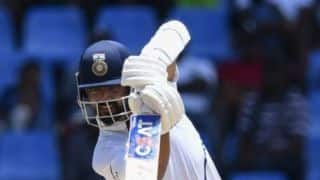