After ending a run of 27 Test innings without a hundred, a period in which he held the New Zealand record for the most fifties (eight) without getting to three figures, Jeet Raval finally got that monkey off his back in his 17th Test.

The 30-year-old Gujarat-born opener went past his previous best of 83 to score 132 on day two of the first Test against Bangladesh in Hamilton, in the process forging with Tom Latham (161) the best opening partnership for New Zealand in nearly half-a-century. (FULL SCORECARD: NEW ZEALAND vs BANGLADESH)

On a flat Seddon Park surface, Raval and Latham put on 254 for the first wicket the third-highest opening partnership by a New Zealand pair and their best since the record 387 set by Glenn Turner and Terry Jarvis against the West Indies 47 years ago. (READ: Latham, Raval and Williamson bury Bangladesh)

Reflecting on the joy of a maiden Test century, Raval credited his partner Latham – with whom he has opened in all 17 of his Tests – as inspirational.

“He did it against Sri Lanka, so for me it was a blueprint for how I wanted to go about my game,” Raval said. “I just tried to take a lesson from Tom’s game and apply that in my game, and it was very nice. We kept it as simple as possible and made sure we stick to our own individual plans and made sure that when the bowlers do get tired, then we capitalise on the opportunities and just build small partnerships and small targets for ourselves, and not look too far ahead. Ultimately it was nice to get that big partnership.” (READ: Bangladesh saving Mustafizur Rahman for Wellington Test)

For Raval, the time spent in domestic cricket during New Zealand’s ODI and T20I series at home this summer were hugely beneficial.

“I was making sure of working on my discipline and the focus I wanted to build on especially getting starts and not being able to go on and get a big one for the team,” he said.

Thanks to his and Latham’s hundreds, as well as Kane Williamson’s unbeaten 93, New Zealand ended day two on 4451/4 with a lead of 217 with six wickets in hand.

“It was all about looking at what the bowler was trying to do and having the mind set on the game plan that I wanted to apply at that stage and just play to the situation,” said Raval. “I wasn’t really thinking about my hundred and eventually bowlers start to get tired towards the end of their spells and I was able to capitalise and the runs came.” 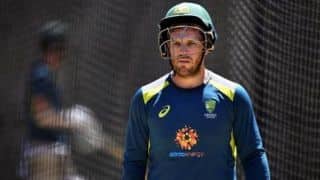