If Rahim does miss the opening Test, Liton Das will don the keeper s gloves and Rhodes believes it s time for Liton to do the job.

Bangladesh coach Steve Rhodes dropped a hint that Mohammad Mithun is all set to return from injury in the first of the three Tests against New Zealand on Thursday.

I m hopeful Mithun will be fine. Mithun looks in good nick. He s got two good scores in the ODI series and he ll be ready, Rhodes was quoted as saying by Dhaka Tribune on Tuesday.

Bangladesh have been grappling with many injury concerns. Besides Mithun, who had suffered a hamstring injury during the second ODI at Christchurch and missed the third ODI, Mushfiqur Rahim also saw his old injuries flare up and might stay out for a bit longer. I m not quite sure where Mushfiq will be with his recovery so he s a doubt for the first Test, Rhodes said. (ALSO READ: It will be hard for Mustafizur Rahman to play in all three Tests against New Zealand: Courtney Walsh)

If Rahim does miss the opening Test, Liton Das will don the keeper s gloves and Rhodes believes it s time for Liton to do the job. Injuries happen and people miss games but it tests the depth of the squad. One door closes and another opens and whoever comes in has to step up. Liton knows he s going to keep wickets and bat, so his job is to do his best and try and replace Mushfiq, he said.

Meanwhile, uncapped fast bowler Ebadat Hossain has been selected in the Test squad and may debut on Thursday. Hossain got the nod after Taskin Ahmed picked up an injury in the Bangladesh Premier League (BPL). (ALSO READ: West Indies, Sri Lanka upsets keep New Zealand wary of Bangladesh)

I came here previously in 2016 but struggled to adjust to the conditions. This time, it has been much better. Fast bowling coach Courtney Walsh has been working with me to improve my consistency and accuracy, Ebadat said.

We had a good practice match where the batsmen performed well and the bowlers got to bowl around 12 overs so I think we re well prepared for the Tests. 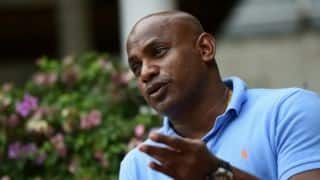