Watling and captain Kane Williamson will have until Friday to prove their fitness.

With record-setting wicketkeeper BJ Watling in doubt for the final Test against Bangladesh, the New Zealand selectors have recalled Tom Blundell as cover.

Watling is nursing what New Zealand coach Gary Stead on Tuesday termed a “minor left hamstring strain”. He did not take the field at Basin Reserve on day five after hurting himself while warming-up before play. After the innings victory that sealed the series for New Zealand, Stead said that the management decided to give him time to recover. (READ: Kane Williamson in doubt for third Test, BJ Watling to be monitored)

Blundell scored a century on Test debut against West Indies in December 2017 when Watling was sidelined with a hamstring injury, thus becoming the first New Zealand wicketkeeper to achieve the feat. He played just one more Test and has not been called on since 2017.

The 28-year-old is coming off scores of 52 and 100* for Wellington in the Plunket Shield.

A New Zealand Cricket statement today said that Watling and captain Kane Williamson (pectoral) will have until Friday to prove their fitness and be available for selection.

The Third Test starts on Saturday in Christchurch. 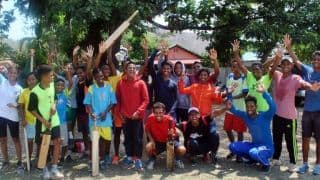