As predicted in the weather forecast, persistent rainfall forced the first Test to be a dull draw as the final day turned into a complete rain washout.

As predicted in the weather forecast, persistent rainfall forced the first Test to be a dull draw as the final day turned into a complete washout between New Zealand and South Africa. In what had slowly turned out as a riveting encounter, this Test had chances of all the possible results, only to be washed out completely. The umpires had to take the inevitable call at around 1.40 pm (local time) after the entire first session was washed out with no signs of rainfall ceasing. At stumps on Day Four, South Africa were leading New Zealand by 191 runs in the second innings with their skipper Faf du Plessis leading from the front with unbeaten 56. LIVE CRICKET SCORECARD, New Zealand vs South Africa, 1st Test at Dunedin

With the last day all to be played for, South Africa needed quick 50-40 runs to extend their lead whereas New Zealand needed quick wickets to stop their opposition from extending their dominance.South Africa opener Dean Elgar was adjudged Man of the Match for amassing 229 run with scores of 140 and 89 in both innings. Earlier in the second innings, Elgar constructed 74 and 80 runs partnership with JP Duminy and du Plessis for the third and fourth wicket to drive his side out of a precarious situation early on having lost Stephen Cook (0) and Hashim Amla (24) quickly.

Towards the end of the penultimate day, South Africa had the game well under control but quick wickets of Elgar, Temba Bavuma (6) and Quinton de Kock (4) pulled the game a little towards the hosts. But du Plessis played a battling knock to see the day off ensuring a 191-run lead at stumps on Day Four keeping 4 wickets intact.

Initially on Day One, winning the toss, South Africa opted to bat first. They got off to the worst possible start losing Cook (3), Amla (1) and Duminy (1) with just 23 runs on the board. But Elgar played a scintillating knock of 140, and along with du Plessis (52) and Bavuma (64), forging innings-saving partnerships of 126 and 74 runs respectively to propel their side to 308 in the first innings. For New Zealand, Trent Boult took 4 wickets while Neil Wagner, Jeetan Patel and Jimmy Neesham took 3, 2 and 1 wicket respectively.

Chasing the South Africa total of 308, New Zealand got off to a healthy start with opener Jeet Raval (52) and Kane Williamson (130) constituting 102 runs for the second wicket. But the Kiwi middle-order crumbled only to be supported by Williamson and wicketkeeper-batsman BJ Watling (50). For the majority of New Zealand innings, Williamson played a lone hand bringing up his 16th Test century and scoring almost half of the runs for his side.

New Zealand managed to reach 341 in their first innings with some powerful hitting from Wagner (32 off 32) towards the final stages, gaining a slender lead of 8 runs. Keshav Maharaj, the South African leg-breaker played a crucial role in stopping the Kiwis by taking his maiden five-for (5 for 94).

Moreover, New Zealand have been dealt with two heavy blows in this Test as they lost the veteran Ross Taylor in the first innings due to a low grade of the right calf, which has ruled him out of the Wellington Test starting from March 15, Wednesday. In the South Africa s second innings, hosts lost their pacer Boult just before the beginning of the third session on Day Four due to a sore hip. Boult will be travelling with the team for the second Test but his involvement in the playing XI is under the shadows of uncertainty and will be monitored for the same before the final call is taken.

Interestingly, this is not the first time a Test involving these two nations at this same venue has ended in the last day wash out. It was back in 2012, where New Zealand needed 264 runs to win on a turning track with just 8 wickets in hand. Back then, bad lights had won the victory whereas five years down the line, rain emerged victorious.

Man of the Match: Dean Elgar 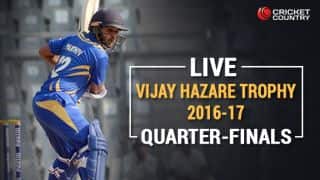