Sri Lanka at stumps were 24/2 with Dinesh Chandimal on 14 and Kusal Mendis on 6.

Centuries from Tom Latham and Henry Nicholls put New Zealand in line for a defining victory over Sri Lanka Friday in the deciding second Test in Christchurch with a 659-run second innings lead and the tourists losing early wickets in their record chase.

New Zealand, who led by 74 on the first innings, declared their second innings on day three in Christchurch at 585/4 with Latham scoring 176 to go with his unbeaten 264 in the drawn first Test. Nicholls was not out on a career best 162 with healthy contributions from Jeet Raval (74) and Colin de Grandhomme (71 not out).

Sri Lanka at stumps were 24/2 with Dinesh Chandimal on 14 and Kusal Mendis on 6.

Victory for New Zealand would give them a fourth consecutive series win for the first time after wins over the West Indies, England and Pakistan in the past year.

With more than two days left, Sri Lanka had reason for patience but lost both openers — Dimuth Karunaratne without scoring and Danushka Gunathilaka — in the first two overs. No team has ever scored more than 418 in a successful fourth innings run chase and the pitch continues to offer some assistance to the New Zealand bowlers.

Sri Lanka, however, were less effective with the ball and de Grandhomme in particular was scoring freely when Kane Williamson declared midway through the final session. De Grandhomme, who had six fours and two sixes in his whirlwind innings, passed the 50 mark in a New Zealand record 28 deliveries, one better than the previous best by Tim Southee against England 10 years ago. (ALSO READ: Colin de Grandhomme hits 28-ball fifty, the fastest for New Zealand)

New Zealand resumed Friday at 231/2 and Latham, whose unbeaten 264 in the drawn first Test is the top score in all Test cricket this year, continued his purple patch with grim determination through 370 deliveries. For the most part, it was a near faultless innings, although he was dropped by Dushmantha Chameera on 32 and survived an lbw review on 75. But, on the stroke of tea, Chameera made the breakthrough when he had Latham caught behind off a faint legside edge. (ALSO READ: With eighth Test hundred, Tom Latham becomes second most successful New Zealand opener)

The only reward with the new ball in the morning session came when Lahiru Kumara trapped Ross Taylor in front to claim the senior batsman’s wicket for 40.

Latham and Nicholls put on 214 for the fourth wicket with Latham achieving his eighth century and Nicholls his fourth. Only three times in cricket history has the winning side scored more than 400 in the fourth innings, while the current record held by the West Indies is 418/7 against Australia 15 years ago in Antigua.

The highest fourth innings score in the modern era is New Zealand’s 451 chasing 550 against England in 2002, while England scored 654/5 after being set a target of 696 by South Africa in 1939. Unlike the first Test in Wellington, where rain washed out most of the final day, fine weather is forecast for the remainder of the Christchurch Test. 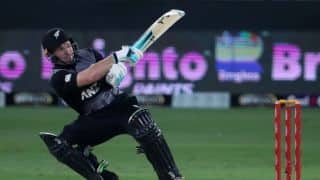