Australia's 12th man for the Cape Town Test says that his conversation with Darren Lehmann lasted over 20 minutes before he finally entered the field.

Australia s 12th man for the Newlands Test match in March, Peter Handscomb, has claimed that footage of the incident which led to skipper Steve Smith and vice-captain David Warner being suspended for 12 months and Cameron Bancroft for nine months, has been heavily edited.

Handscomb, who on day three of that controversial Test was seen on television leaving the Australian dressing room and entering the field to converse with Bancroft, the player who was picked up by cameras attempting to tamper with the ball and then trying to hide the foreign object, has alleged that the clips of him doing so have been seriously doctored.

Speaking to reporters on Friday, Handscomb said that his conversation with former Australia coach Darren Lehmann lasted over 20 minutes before he finally descended the steps and onto the field, and that he had done so only after a team-mate had exited to use the restroom.

“It’s actually amazing how much the media edited it, it shows me on the walkie-talkie then running out talking to Cam,” said Handscomb. “I get put into a catching position next to Cam … and literally was just trying to have a joke with him, there was nothing else mate – so all this build up about me trying to do something there was just, it wasn’t there.

On day three of the Cape Town Test, Bancroft was picked up by the broadcaster s TV cameras putting a yellow object down the front of his pants before the two on-field umpires walked over to where he was later stationed and asked what was in his pockets. Soon enough, footage was shown in which Bancroft was seen rubbing the ball and then seemingly putting an object back in his right pocket.

Around this time, visuals were aired on TV showing Lehmann looking at the giant screen at Newlands and then covering his mouth while reaching for a walkie-talkie place next to him. The cameras then panned to Handscomb, who then entered the field and delivered a message to Bancroft who subsequently hit the yellow object down his pants.

Pressed for more details on what was discussed between himself and Lehmann, Handscomb said that plenty on the ball-tampering controversy had been revealed and that he, like the Australian team, was keen to move forward.

On March 29, Lehmann announced that he would stand down as Australia s coach after the final Test against South Africa. 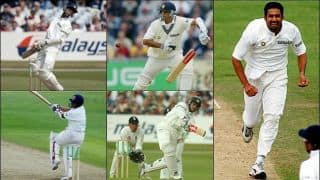 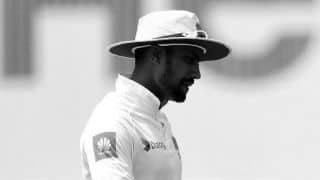