Dambulla: With the Test series in the bag, Pakistan will now focus on the one-dayers against Sri Lanka from Saturday that could determine their qualification for the ICC Champions Trophy 2017. Misbah-ul Haq‘s tourists won the Tests 2-1 by chasing down a target of 377 for the loss of just three wickets after being 13-2 in the decisive final match in Pallekele on Tuesday. Pakistan achieved the sixth highest successful chase in history through a brilliant unbeaten 171 from Younis Khan, 125 from opener Shan Masood and 59 not out from Misbah. But none of these batsmen will be seen in action when the five-match one-day series opens in Dambulla —with Misbah having retired from limited-overs cricket and both Younis and Masood not selected. Read: Sri Lanka vs Pakistan 2015, 1st ODI at Dambulla: Preview

Top order batsman Azhar Ali will lead the ninth-ranked tourists who need a series win to keep their hopes alive of qualifying for the eight-nation Champions Trophy in England. “This is obviously a very important series for us and we will make sure we play well and win,” Azhar said. “Most of the players know what to expect in Sri Lanka. We are ready,” he said. Pakistan have struggled in one-day cricket in recent months after being knocked out by eventual champions and hosts Australia in the quarter-finals of the ICC Cricket World Cup 2015 in Adelaide in March. Azhar’s men suffered a 3-0 embarrassment at the hands of Bangladesh in April, before beating lowly Zimbabwe 2-0 in their first home series since the 2009 militant attack on the Sri Lankan team bus in Lahore. Read: Umar Akmal ignored for ODIs against Sri Lanka for failing to report to training camp

New faces in both teams

Pakistan have called up left-arm fast bowler Mohammad Irfan, the tallest international cricketer ever at seven feet one inch (2.16 metres), who has recovered from a hip injury suffered during the World Cup. But pace spearhead Wahab Riaz is still sidelined with a hand injury sustained during the Test series, while spinning all-rounder Haris Sohail has an injured knee. The touring squad includes two new batsmen in Mukhtar Ahmed, 22, and Bilal Asif, 29, while batsman-wicketkeeper Umar Akmal and seamer Junaid Khan were not selected.

Sri Lanka, playing their first one-day series since the retirement of Mahela Jayawardene and Kumar Sangakkara from the shorter format after the World Cup, are also rebuilding for the future. The hosts, who were also World Cup quarter-finalists, have included two new allrounders, Milinda Siriwardana and Sachith Pathirana, both of whom bowl left-arm spin. Read: Sri Lanka announce squad for five-match ODI series against Pakistan

Sri Lanka’s 15-man squad, led by Test captain Angelo Mathews, includes just six players who took part in the preceding Test series. The rivals will get their first taste of the new one-day regulations which have no Batting Powerplay, no compulsory close-in catchers in the opening 10 overs, and allow five fielders outside the circle — instead of four — in the final 10 overs. The series starts with a day match in Dambulla, followed by day-night games in Pallekele (July 15), Colombo (July 19, 22) and Hambantota (July 26). 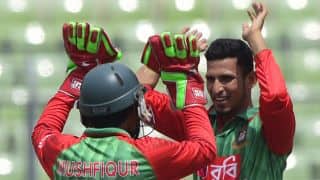