The home side dominated, winning both T20s and two of the ODIs, with the third rained off, but the symbolism of the matches mattered far more than the results. And as the Africans flew out early on Monday, the Pakistan Cricket Board (PCB) was already talking up the chances of luring more international teams. READ: Congratulations, Pakistan! Hope the Zimbabwe series is start of a new chapter

But much remains to be done to convince foreign boards, players and umpires that the country is once again safe to tour. Zimbabwe are a fairly low-profile team but they still needed a mammoth security operation — reportedly bigger than for visiting heads of state — with 4,000 policemen guarding the stadium and another 2,000 at the team hotel and on their route to the ground.

Even with these measures in place, a blast hit Lahore during Friday’s second ODI, killing two people, with Pakistani officials giving conflicting accounts.  Police insisted it was a gas cylinder explosion but a government minister said it was a suicide bomber who detonated explosives when challenged by police at a security cordon some 1.5 kilometres from the ground. READ: How much the cricket world has changed since Pakistan last staged an international game

Despite the blast, Zimbabwe went ahead with the final ODI and PCB chairman Shaharyar Khan said it was a complete team effort which helped the revival, hailing the courage of the police. “I think praise is due to an unknown policeman guarding the team to the government and to every cricket fan who packed the stadium despite security hassles and made this a successful and safe series,” Khan told AFP.

Fans waited in blistering temperatures exceeding 40 Celsius to pass through numerous security checkpoints on their way to the ground — a testimony to the enthusiasm for the return of live action. READ: International cricket resumes in Pakistan: A plea to fans

Zimbabwe pressed ahead with the tour despite scepticism from the international players’ union and the fact the International Cricket Council (ICC) said it would not send neutral umpires over safety fears. An attack by militants on a bus in Karachi that left 45 people dead just days before the tour created further doubts, but Zimbabwe Cricket (ZC) managing director Alistair Campbell said his country was glad to have played its part in Pakistan’s cricket revival.

“It was a tough decision to send the team, especially with opposition by some people in the wake of killings in Karachi, but in the end we are happy that we played a part in the cricket revival in Pakistan with a safe and successful tour,” he told AFP. “The passion of the people was amazing and for the first time in the sub-continent I saw people clapping for the opposition in a packed stadium.” 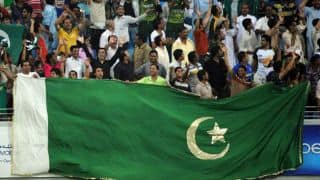