Aaron Finch's dominant form against the white ball has led many to dub him as a limited-overs specialist.

Ever since he made his ODI debut in 2013 against Sri Lanka at Melbourne, Australia batsman Aaron Finch has been phenomenal in white ball cricket.In ODIs, Finch, who has played 93 matches, averages 38.19, while in the T20I, he averages 45.60 in 42 matches.

Next month will mark a turning point in Finch s career which will see him don the Baggy Green cap for the first time in the first of the two Tests against Pakistan in the UAE. His dominant form against the white ball has led many to dub him as a limited-overs specialist, something that does not augur well with him.

“I don’t understand why people would say that,” he told cricket.com.au.

“I think my record over the last two or three years in the longer formats has been pretty consistent. My form against the white ball has been very good, so I’m just looking forward to the opportunity.”

Former Australia captain Ricky Ponting too feels Finch deserves an opportunity in the Test arena. I’ve seen Finchy up close and personal over the last seven or eight months. There s no doubt he’s a different player than even he was 12 months ago,” Ponting said.

“He understands his own game better than he ever has. His four-day cricket for Victoria has probably been better than anyone else in the country, probably apart from Matthew Renshaw.”

“And it was really nice to play on some wickets at The Oval that spun a lot. The last four-day game I played there was with a pink ball and it spun square, it was a slow turner. So, I think that helps. And something that I’ve been working on is my play against spin as well, so let s see how it goes. I probably was a little bit more aggressive in England, particularly in county cricket. I was ultra-aggressive and it seemed to pay off. So, maybe I can start going even harder.” 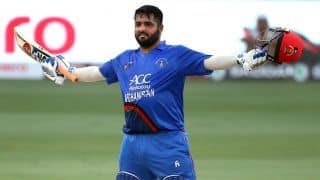