West Indies' magnificent 84-run triumph is their biggest in terms of runs in T20Is.

Statistical highlights of the ICC World T20 2014 match between Pakistan and the West Indies at Dhaka on April 1. West Indies defeated Pakistan by a comprehensive 84-run margin in the Group 2 Super 10s match. They have qualified for the semi-finals of the T20 World Cup.

# Bravo has got his second Man of the Match award in T20Is — his first was against India for recording an unbeaten 66 and capturing four for 38 at Lord’s on June 12, 2009.

# Pakistan (82) have recorded their lowest total against the West Indies in T20Is. This total is their second lowest behind the 74 vs Australia at Dubai (DSC) on September 10, 2012.

# West Indies’ magnificent 84-run triumph is their biggest in terms of runs in T20Is, eclipsing the 74-run win over Australia at Colombo (RPS) on October 5, 2012.

# West Indies and Pakistan have won two matches each against each other out of four played in T20Is.

# Bravo and Sammy were associated in a stand of 71 — West Indies’ highest for the sixth wicket at the World T20.

# The stand is West Indies’ second highest for the sixth wicket — the highest being 73 between Denesh Ramdin and Lendl Simmons against England at Bridgetown on March 13, 2014.

# Samuel Badree (three for 10) has recorded his second best bowling performance in T20Is — the best being four for 15 against Bangladesh at Dhaka on March 25, 2014.

# Ramdin has effected four stumpings, emulating Kamran Akmal’s feat against the Netherlands at Lord’s on June 9, 2009. Both share a record for most stumpings in an innings in T20Is.

# Five stumpings (one by Kamran Akmal and four by Ramdin) in the match is a record in a T20I.

# Sunil Narine (three four 16) has registered his best bowling figures against Pakistan, eclipsing the three for 26 at Kingstown on July 28, 2013. The performance is his second best at the World T20, next only to the three for nine against Sri Lanka at Colombo (RPS) on October 7, 2012.

# Pakistan could score just 13 runs off the powerplay overs (0-6) losing four wickets, equalling the worst powerplay score by a full member team in T20Is. Zimbabwe had managed 13 for four in the powerplays against the West Indies at Port of Spain on February 28, 2010. 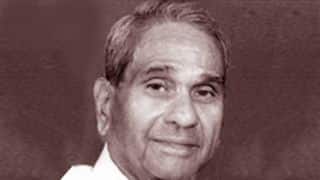