Will Imad Wasim and Abid Ali make it? What about Mohammad Amir? Who is the second spinner?

Pakistan will announce their squad for the 2019 ICC Cricket World Cup on Thursday, April 18.

After the team was beaten 0-5 in the UAE by Australia last month, there are concerns over the composition and form. That series was supposed to test Pakistan’s bench strength, according to coach Mickey Arthur, and after it the South African said there were some positives.

Before the World Cup starts on May 30, Pakistan are set to play a one-off T20I and five ODIs against top-ranked England in England.

Ahead of Thursday’s World Cup squad announcement by the Pakistan Cricket Board, there are a few concerns over the probable squad.

Sarfraz Ahmed was one of six players rested for the Australia ODIs, but he is expected to return. Sarfraz led Pakistan to the ICC Champions Trophy title in 2017 in England.

For the five ODIs against Australia, Pakistan rested Fakhar Zaman and played Imam-ul-Haq in three matches. The pair of Shan Masood and Abid Ali were handed their ODI debuts with contrasting results.

Masood, previously a Test opener, scored 111 in four games with a fifty in the last ODI. Abid scored 112 on ODI debut and 0 in his second. It has been reported that the 31-year-old has not passed the mandatory yo-yo fitness test, so if true than he is unlikely to be named.

From the fast bowling group, Hasan Ali and Shaheen Shah Afridi appear like immediate selections. Between Mohammad Amir and Junaid Khan, most likely one will get the nod. There are also Usman Shinwari, Mohammad Hasnain and Mohammad Abbas in the wings.

With Shadab Khan returning after missing the Australia series, Pakistan have one frontline spinner. The second will be between Imad Wasim and Yasir Shah. Imad failed the yo-yo test, but has been allowed more time to prove his worth.

Mohammed Hafeez, who was sidelined for some time after undergoing follow-up surgery on a fractured thumb, was in doubt but this week the PCB said that he had cleared the mandatory fitness test. Hafeez, Shoaib Malik, Faheem Ashraf, Asif Ali and Haris Sohail are the allrounders.

Mohammad Rizwan looks set to be the second wicketkeeper after Sarfraz.

The Pakistan cricket team is scheduled to leave for England on April 22. 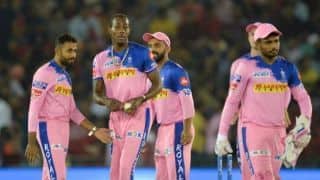