Following his involvement in spot-fixing, Pakistan batsman Nasir Jamshed has been handed a 10-year ban by the PCB.

Following his involvement in spot-fixing, Pakistan batsman Nasir Jamshed has been handed a 10-year ban by the Pakistan Cricket Board’s anti-corruption tribunal. Jamshed, who was one of the prime accused in the spot-fixing scandal that rocked the 2017 Pakistan Super League, was banned from all forms of cricket and already serving a one-year ban for not willing to cooperate.

Jamshed has played two Tests, 48 ODIs and 18T20Is for Pakistan in which he’s scored 1832 runs. The tribunal found him guilty of five breaches of the anti-corruption code.

According to PCB’s legal advisor Taffazul Rizvi, Jamshed was the “linchpin” in the entire scandal. “The tribunal has reached the verdict that the PCB’s multiple charges against Nasir Jamshed have been proved and he was banned for 10 years,” Rizvi told reporters. “He will not be allowed to be involved with cricket or cricket administration even after his period of ban is over.”

Others to have been accused of hampering the spirit of the game, PCB also passed sentences for Sharjeel Khan Khalid Khan, slapping the two with a ban of five years. Fast bowler Mohammad Irfan and allrounder Mohammad Nawaz have also been suspended for 12 and two months respectively.

“PSL 2017’s fixing trial has concluded,” Rizvi said “There are a few cases you really don’t rejoice after winning; instead you feel sad about it because it ends with another career destroyed. It’s painful to see a player who didn’t have his conduct right and didn’t fulfil his responsibilities according the anti-corruption code of conduct. Our stance from the first day was he was the linchpin and he is the one who recruited players.

“Our point was proved and accepted by the tribunal, and they found him guilty on multiple charges. Even if he returns after rehabilitation, he is not allowed to be engage in any cricket management role and will be kept him away from cricket. We also suggested his name be added in a list of persons mentioned in anti-corruption lectures who are to be avoided by the players. So this all ends here.” 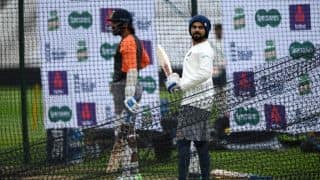