Twitter was full of moving tributes to Phillip Hughes.

Phillip Hughes’ funeral brought about a number of tributes and remembrances on Twitter from cricketers, sportsmen, fans, and supporters. Hughes passed away mere days before his 26th birthday after being struck by a bouncer on the back of his head while batting. Hughes was pushing for a spot in Australia’s Test team, and was batting on 63 when the incident occurred. His funeral was held in his hometown of Macksville in New South Wales.

Sad day in cricket as we say goodbye to one of our own who died doing what we love…great eulogy my @MClarke23 .#RIPHughsey #CricketFamily

A sad, poignant, beautiful service to celebrate the life of Phillip Hughes today in Macksville #RIPPhillipHughes

onbehalf of Pakistan,a cricket loving country we send deepest condolences to Phillip Hughes’ family,Australia & all affected by this tragedy

Of all the tributes, words and videos, this powerful image of our captain farewelling his mate got me: pic.twitter.com/ukdt70jtdx #63 #63notout

Hughes’ funeral was attended by former and current cricketers such as Brett Lee, Glenn McGrath, Virat Kohli, Ricky Ponting, Brian Lara, Shane Warne, Murali Vijay, among others. Sean Abbott, who bowled the bouncer that felled Hughes and who has been receiving counseling as a result, was also in attendance. 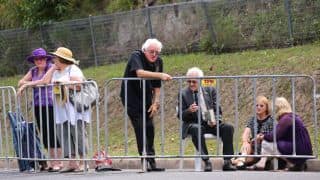 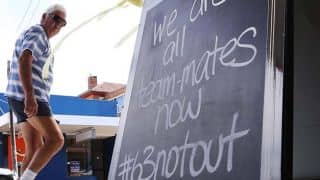