PHOTO: Anil Kumble posts picture of himself with Rajesh Chauhan, Venkatapahthy Raju from 1992-93 series vs England

PHOTO: Anil Kumble posts picture of himself with Rajesh Chauhan, Venkatapahthy Raju from 1992-93 series vs

Anil Kumble picked up 21 wickets in the Test series vs England.

India leg spinner Anil Kumble took to social media to to post a picture of himself, Rajesh Chauhan and Venkatapathy Raju, the series where the trio wrecked havoc against England when they visited India in 1992-93. England lost the three-match series 3-0. England however redeemed themselves after they managed to secure a 3-3 series drawing performance in the One-Day International (ODI) series following the Test series. Kumble went on to become India’s leading wicket-takers with 619 wickets to his name. Raju and Chauhan had decent international careers but it was Kumble, who surpassed everyone and had the most successful international career among the three. READ: Anil Kumble reflects on career on 25th anniversary of his Test debut

Kumble finished as the leading wicket-taker in the series with 21 wickets, followed by nine wickets for Raju. Kumble was recently included in the ICC Hall of Fame and became only the fourth Indian player to be inducted. Chauhan picked up 47 wickets in his 21 Tests, whereas Raju played seven more Tests than Chauhan and scalped 93 wickets. READ: Anil Kumble: 7 moments that define the legend’s international cricket career 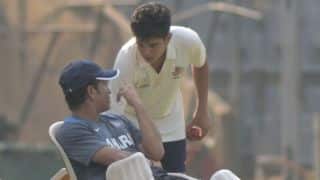