In his last ODI in 2017, Ashwin returned with the figures of 3/28 against West indies.

On a day when country’s senior-most speedster Ishant Sharma spoke about how perceptions affected his chances in ODIs” his Test teammate Ravichandran Ashwin also echoed same sentiments reminding that he is “no slouch with white ball”.

Ashwin has not played limited overs cricket since 2017 West Indies tour as selectors and team management felt that wrist spinners Kuldeep Yadav and Yuzvendra Chahal are better options. To be fair to both Virat Kohli and Ravi Shastri, both Kuldep and Chahal have done well. (ALSO READ: I m not bothered about selection: Ravichandran Ashwin)

“I don’t know, it is a perception. I am no slouch. In the white ball format, my records are not bad like what it is perceived to be. It is out of perception that wrist spinners are required in modern one day cricket that I am sitting out,” straight-talking off-spinner said when asked about the challenge of concentrating on one format.

He also pointed out that in his last ODI game for the country against the West Indies in North Sound on June 30, 2017 he had returned with figures of 3 for 28. (ALSO READ: Chahal and I haven t pipped anyone: Kuldeep on shutting the door on Ashwin, Jadeja)

“The last ODI I played, I got 3 for 28. I would always look back at my career and I would like to believe it’s not due to my efforts that I am sitting out (but) it is due to the supply and demand that the team requires,” he said.

Ashwin is happy with his performance in the Syed Mushtaq Ali Trophy where he got seven wickets from six games at a decent economy.

“I went and played the Syed Mushtaq Ali (T20 tournament) and I had a decent outing. That’s how I look at it. I am playing cricket and it is not like I need to specialise in one particular format. It is the challenges of the modern day game, I will be looking forward to do whatever I can do best,” explained the 32-year bowler. (ALSO READ: If I must replace Kuldeep or Chahal, I ll pick Ravichandran Ashwin for the ICC World Cup 2019 )

Ashwin, captain of the Kings XI Punjab in the IPL, spoke to the media after unveiling a unique cricket memorabilia launched by UK-based CricFig International along with Tamil Nadu teammate and Kolkata Knight Riders’ skipper Dinesh Karthik in Mumbai.

On the issue of limiting the workload on India players in the IPL ahead of the World Cup, Ashwin said it’s not easy to look too far ahead and also mentioned that the players knew about how to maintain fitness.

“I don’t think as a cricketer you can look far ahead about what needs to be done and how you can manage it. As a cricketer or as a sportsperson, you just concentrate on what happens today. The franchise has invested money on you. Obviously, it is a massive tournament, everybody plays for pride, everybody wants to perform and excel.” (ALSO READ: Kuldeep has been bowling well, but Ashwin is still the best )

However he agreed that the workload factor will always stay at the back of their heads.

“It definitely stays at the back of the head because it is being spoken about a lot more right now. I am sure the players are responsible enough and more fitness-aware and be able to handle it than they ever were.

But at the same time he said the World Cup was huge and no one wants to miss it.

“Probably because of the number of injuries and the amount of premium players that are right now available for the country and how important every spot is. It is a dream for every cricketer to represent his country at the World Cup, it is a big stage. Obviously, bowlers have more chances of succumbing to injuries because of the workload they go through.”

“It is physically harder on the body than the batters. Probably from that point of view, if you look at a (Jasprit) Bumrah or a Bhuvneshwar – Bumrah has been fine but Bhuvneshwar has had a few (fitness) concerns over the last year or so. I think from that point of view the bowlers need to be taken good care of,” he added. (READ: Chahal, Kuldeep strongest spin duo in world , says Kohli)

Ashwin also said that there has been no communication with the franchises about the chances of some players missing part of IPL, commencing on March 23, owing to the World Cup that follows from May 30 in England.

“No we have no intimation regarding any such player policy or anything like that and they have been very clear in terms of communication with regards to whatever needs to be communicated to the franchisee so far. Yes, the schedule is not out yet like we all know but the elections are something that is more important than anything else,” he said. 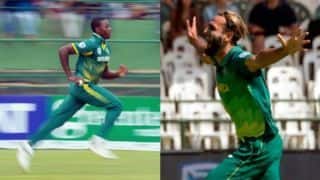