The lavish praise comes ahead of the 5 ODIs against Australia which will be the final opportunity for India to get their combinations right.

The lavish praise comes ahead of the five match one-day series against Australia which will be the final opportunity for the world number two side to get their combinations right and firm up their favourites’ tag. (ALSO READ: 1st ODI: India’s World Cup fine-tuning gets underway in Hyderabad)

“It’s all about combinations but I don’t see one ahead of the other in the pecking order. Both of them together are the strongest spin bowling partnership in the world at the moment,” Kohli said ahead of the first Australia ODI in Hyderabad on Saturday. (ALSO READ: What mystery? Sab bakwas hai: Kuldeep Yadav)

“Our success in the last couple of years is mainly because of these two guys in the team and their impact in the middle overs and their ability to pick up wickets for us. (READ: Last chance for India to iron out kinks before WC)

“If the combination needs to be changed it will be purely on which bowler is stacked up better against opposition batsmen.”

Chahal has claimed 71 wickets with his leg spin in 40 ODI games since making his debut in 2016.

Kohli said the team’s think-tank will not be swayed by the performances in the Indian Premier League (IPL) when they finalise the squad for the 50-over World Cup starting May 30 in England and Wales. (ALSO READ: Have learnt a lot from him: Kuldeep on partnership with Chahal)

The IPL will begin on March 23 as top players from India and around the world will converge for the glitzy T20 tournament.

“Before we head into the IPL, we need to be absolutely clear of what team we want for the World Cup. I don’t see anything changing on how the IPL goes for any of the players,” said Kohli. (ALSO READ: Whenever we need help in bowling, Kuldeep and I always ask Dhoni: Chahal)

“If one or two players do not have a good IPL season, it doesn’t mean that they are out of the picture for the World Cup. Those things are not going to matter.” 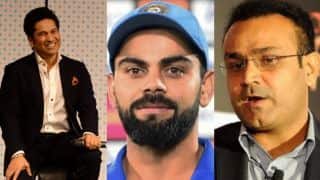