"Following this South Africa series, there is another three months until the England series. For now, this is what I've planned for. There comes a time for every cricketer, when they have to stop playing. I think that time has come for me," Herath said.

With 418 scalps, Herath is Sri Lanka’s second-highest wicket taker in Test cricket, behind Muttiah Muralitharan. In the Galle Test against Bangladesh in March 2017, he became the most successful left-arm spinner in Test cricket when he surpassed the 362 wickets of Daniel Vettori. Earlier this year in Bangladesh, he even laid claim to the record held for most Test wickets taken by a left-arm bowler when he surpassed Wasim Akram‘s tally of 414.

Herath has played 90 Tests, 71 ODIs and 17 T20Is claiming 418, 74 and 18 wickets respectively. He made his debut way back in 1999 against the Australians at Galle and impressed immediately with 4 for 97. His first wicket was that of Ricky Ponting, while Steve Waugh was another of his scalps in that Test. Most of his 400-plus Test wickets cricket have come in the past decade, and it will not be an exaggeration to say that Herath’s career really took off post the retirement of Murali, which allowed him a chance to evolve as Sri Lanka’s wrecker-on-chief. He has 33 five-fors and 9 ten-fors in Test cricket.

“Maybe my final series will be the England series later in the year,” Herath told BBC Sinhala. “Following this South Africa series, there is another three months until the England series. For now, this is what I’ve planned for. There comes a time for every cricketer, when they have to stop playing. I think that time has come for me. I’m really glad I’ve been able to play as long as I have. But the most important thing is that of those 18 years, I wasn’t able to play for Sri Lanka for about seven of those years. I’m proud of what I was able to do in those seven years the training I did, and the desire I had, especially.”

Herath had earlier announced his retirement from ODIs and T20Is after an immensely successful 2014 T20 World Cup campaign that Sri Lanka won. Against New Zealand at Chittagong while defending a modest 119, Herath returned stupendous figures of 3.3-2-3-5 and helped his team break the back of the opposition. When it comes to batting, he is a natural stroke-maker with a penchant of the sweep, and has 3 Test fifties to his name.

With greats like Kumar Sangakkara, Mahela Jayawardene and Tillakaratne Dilshan having retired from top-flight cricket in recent years and now Herath also following suite, the times ahead would hold further tests and trials for Sri lankan cricket. 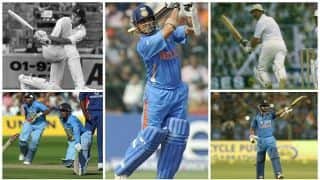