The state has given ever-reliable Cheteshwar Pujara, all-rounder Ravindra Jadeja and a lethal pacer in Unadkat to the Indian team and it has instilled confidence in other players.

From a team which just thought of avoiding embarrassing defeats, Saurashtra are now set to play their third Ranji Trophy 2018-19 final in seven years and the key to their transformation has been the changed mindset, says skipper Jaydev Unadkat. (ALSO READ: Umesh vs Pujara set to draw attention as Vidarbha take on Saurashtra in Ranji Trophy final)

The state has given ever-reliable Cheteshwar Pujara, all-rounder Ravindra Jadeja and a lethal pacer in Unadkat to the Indian team and it has instilled confidence in other players. (ALSO READ: Vidarbha’s road to the final)

And yet there is no ‘ego’ or selfish motives in a limited pool of players, says coach Sitanshu Kotak, who has been working with the team for the last five years. (ALSO READ: Saurashtra’s road to the final)

Unadkat, who will lead the side against Vidarbha in the final, said the Ranji Trophy is not about the big teams anymore.

“It has been a dream decade for Saurashtra. The way we have come up as a team . No one would have thought of a Ranji trophy final between Saurashtra and Vidarbha 10 years ago. That’s how cricket has spread in India,” said Unadkat.

“We have started to believe we can win against the big teams. That’s one thing, which has changed. I have been with teams where the mind-set was just not to lose badly against a big team. But it has changed because now we have some great players.”

Coach Kotak, who also played for the side for two decades, said players like Pujara and Jadeja have been open about sharing inputs with youngsters.

“You need 3-4 leaders in a team with different ideas. Players get bored listening to one guy. There is no ego in this team. And we worked on a few areas like fast bowling, batting on green pitches, it helped in improving,” said Kotak.

“It’s a slow process. When you groom a player consistently and he starts getting results, then you get self-belief. There is no magic that you can do in one year, it takes time.”

The coach said he also made a conscious effort to not over-criticise the players when they make mistakes, like Sheldon Jackson did recently by throwing away his wicket.

“It’s also about how you react to mistakes. You can create fear in minds of players to get that performance but that will make the player limited. There is a way and timing of saying things.

“You should behave in a way that the player himself realises the mistake he has made. I don’t satisfy my ego by chiding a player in front of everyone,” he said.

Unadkat, who is relishing the leadership role, said Saurashtra is not about one or two players.

“There is fight among youngsters for places and they know if they have to play, they have to win it for the team.

“If you saw the last two knockout games, it was not just about Cheteshwar. All the guys played their part. Against UP, Hardik and Snell batted well (in chase) and Sheldon batted well with Pujara in the last game.”

Unadkat also made it clear that they are not a desperate lot.

“The kind of games we have played does not make us desperate. Intensity with which we played against Karnataka, it was not less than a final. If we can win that big and against a side as good as Karnataka, the final is not a big deal.”

Vidarbha captain Faiz Fazal, who has been instrumental in guiding the team to the final, had a similar view about his side.

“The team has enough inspirational personalities. In every game since the last two years, somebody or the other raised their hand to take responsibility,” he said.

“Akshay Wadkar scored three centuries, Sarwate made a crucial hundred and took a five-for, Akshay Wakhare did well, Sanjay wasn’t in form initially but he scored a 100 in the quarterfinal.”

He though singled out veteran Wasim Jaffer, who continues to pile on runs.

“He played in a lot of pain last year. He had elbow pain, knee pain and ankle pain. It is understandable as he has spent so many years on the wicket.

“He has worked on his diet and training this year. It is visible as he has become slimmer. Batting-wise, I don’t see any changes as such. He works very hard. He is god-gifted too,” added Fazal. 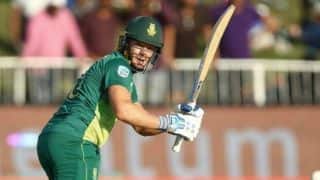