For Railways, Thakur and Chaudhary returned with four wickets each.

Chhattisgarh added 78 runs to their overnight score before they were bowled out for 300 on day two of the Ranji Trophy 2018-19 Round Three Elite A match against Railways at the Shaheed Veer Narayan Singh International Stadium in Raipur on Wednesday.

Resuming at their overnight score of 222/5, Chhattisgarh’s 78-run partnership for the sixth wicket was broken with Karan Thakur picking up his third wicket after Vishal was caught by Shivakant Shukla for a well-played 91-ball 52.

Manjeet Chaudhary, who snapped three wickets on the opening day, cut short Sumit Ruikar’s stay after he was caught by Shukla for just 12. Amandeep Khare tried to steady to innings, but with no support at the other end, he fell for 54 off Anureet Singh.

Thakur claimed this fourth wicket in Shivendra Singh, who added just 17 to the total. Mohammad Shahnawaz was run out for a duck with Chhattisgarh ending their first innings at 300. For Railways, Thakur and Chaudhary returned with four wickets each. Thakur was much more economical in his 35 over going for just 98 runs, while Chaudhary went for 85 runs in his 19 overs.

ALSO READ: Services cut off Suresh Raina but UP eke out lead

In reply, Railways suffered a top order collapse. They lost both their openers inside seven overs with just nine on the board. Saurabh Wakaskar added the nine runs before he was caught by Sanjeet Desai off Shivendra Singh. In the next over, Shukla was caught behind by Manoj Singh off Pankaj Rao.

Wicketkeeper-batsman Nitin Bhille added 10 before he edged it behind to Manoj off Vishal Singh. PS Singh and Arindham Ghosh then conjured 78 runs for the fourth wicket to steady the ship.

Singh brought up his half century and was unbeaten on 56 off 134, his innings decorated with seven boundaries, while Ghosh was unlucky to edge it behind to Manoj to give Rao his second wicket. 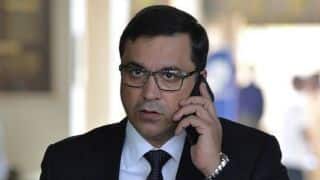